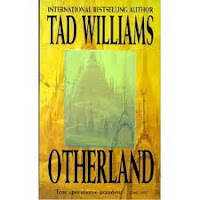 Best-selling fantasy author Tad Williams begins a far-reaching cyberpunk saga with Renie Sulaweyo, a teacher in the South Africa of tomorrow, realizing something is wrong on the network. Some of the younger kids, including her brother Stephen, have logged into the net, but they can't get back out. The clues point to a mysterious golden city called Otherland, but everyone who tries to find out what's going on ends up dead. Settle in for a long, enjoyable ride, because this 770-page monster is just the first of four projected novels. Amazon

According to Tad William's website, the original title for Otherland was North on the Data Stream, which will give you a good idea of what Otherland is about. As the San Francisco Chronicle said, it really is "the ultimate virtual-reality saga." I feel it is science fiction, fantasy, cyberpunk, and a mystery novel all mixed together. And at 770 pages it is an epic saga.

In this future the internet and virtual reality have become a part of everyday life. The mystery is that children are lapsing into comas - and this is apparently related to their time online in certain forbidden virtual reality sites. But this is only one part of the novel. Williams follows several story lines. The main one follows Renie Sulaweyo, a black South African who teaches university students how to use the internet and virtual reality equipment. Her brother, Stephen, falls into a coma. The characters in the stories are so far removed from each other that at first it seems impossible that they could have any connection.

The real joy in this huge saga, which Williams acknowledges was "hideously complicated to write," is that each story line, each set of characters, is well developed and just as interesting and intriguing as the rest. As the action moves from one character to another I was equally interested in what was happening to every character. It is also all very well written. With Otherland, Williams has created a huge, intricate, complete world. It also didn't seem as frantic as the cyber punk I've tried to read in the past.

My one anxious moment came at the very end when I realized that it doesn't end. You need to go right on to the second book. Thank goodness I had the second book here and was able to start it immediately. Upon reading the preface in the second book, I discovered that Williams considers all 4 volumes (all 700+ pages each) to be one book and so the whole story will not be completed until the end. This will be quite the time investment, however, if Otherland is representative of the whole series it will be worth it in the end.
Very Highly Recommended

It started in mud, as many things do. opening

Things became even more complicated after Paul died.
He was dead, of course, and he knew it. How could he be anything else? He had seen the howitzer shell diving down on him from the sky, a wingless, eyeless, breathtakingly modern Angel of Death, streamlined and impersonal as a shark. pg. 7

Paul sighed deeply and stood up. He did not remember much about his life before the War, and at this moment even the immediate past was dim, but he did remember that there had been a certain kind of story in which an impossible thing happened, and once that impossible thing had proved that it was not going to un-happen again, there was only one course of action left: the impossible thing must be treated as a possible thing. pg. 9

"You're talking about a system crash on the net." She wondered for a moment if Stephen understood the difference between the net and real life. He's only eleven, she reminded herself. Things outside of his narrow circle aren't very real yet. pg. 26

That's what I need. She was bleary with approaching sleep; even her thoughts felt heavy, like a burden she ached to put down. I don't need more net, more full-surround realism, more pictures and sounds. I just need more time. pg. 29

a subscription to the Inner District net was very expensive, and so were the creative fashions necessary to retain one's place among the elite, but even if you couldn't afford a new and exotic sim every day, even if you couldn't afford to redesign your business or personal node every week. just keeping Inner District residency was still a major social cachet in the real world. These days, it was often the last pretension that the downwardly mobile would relinquish - and they did not give it up easily. pg. 39

She wasn't a bad girl, really, although once her fish died because she forgot to feed him for a bunch of days. She didn't think of herself as a liar either, but sometimes it was just... easier not to tell. So when her mother asked her where she was going, she smiled and said, "Portia has Otterland. It's new and it's just like you're really swimming except you can breathe and there's an Otter King and an Otter Queen..." pg. 45


She snorted, making her slow way up the stairs. "Falling to a low estate can do that - you see so much more of the world than you did before. You become very aware of how thin the line is, of how little safety exists." pg. 215
Posted by Lori L at 3:04 PM