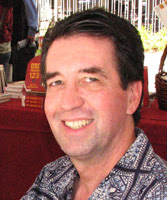 A Guest Post by Christopher Meeks,
author of  Love At Absolute Zero

Christopher Meeks began as a playwright and has had three plays produced. Who Lives? A Drama is published. His short stories have been published in Rosebud, The Clackamas Literary Review, The Santa Barbara Review, The Southern California Anthology, The Gander Review, and other journals and are available in two collections, The Middle-Aged Man and the Sea and Months and Seasons. He has two novels, The Brightest Moon of the Century, a story that Marc Schuster of Small Press Reviews describes as "a great and truly humane novel in the tradition of Charles Dickens and John Irving," and his new comic novel, Love At Absolute Zero.

Thank you, Lori, for joining the Love At Absolute Zero blog tour and for letting me jump in here. You asked me about the research I did to get the scientific details down pat in the novel. Your question coincidentally came on the opening day of the Steven Soderbergh film Contagion, and from an article I read recently in the Los Angeles Times, he had the same goals I had: to get the science right yet not let the science be overwhelming or hijack the story.

As you have in your review, Love At Absolute Zero centers on a physicist using the tools of science to finding a soul mate in three days—which I find funny. One of the things I most adore about writing novels is I get to research and become expert at something that I hadn’t ever thought of being an expert on before. Here, I had to learn quantum physics and then be able to explain it to the average reader. However, before I jump
ahead, let me clarify why Gunnar is a physicist.

When I conceived this novel, I needed my protagonist to work in Denmark for plot reasons, and it’s difficult for Americans to get a work permit there unless no other European can fill the job. Denmark is big into physics as I learned when I’d spent my junior year abroad in Denmark. I lived in a town called Roskilde, and there was an important nuclear research facility there called Risø, which was a part of the Niels Bohr Institute. Some Americans worked for Risø. I’d met them at a local bar, long before I was thinking of this novel.

Once I decided Gunnar would be a physicist, I made him nuclear, and he worked at
Risø—easy enough. Then I’d learned the Danes had outlawed all nuclear facilities in the
late 80’s. He couldn’t be a nuclear physicist. So what would he do? I leaped onto the
Internet and looked up the Niels Bohr Institute. I found the email addresses of many
people who worked there—graduate students, post-docs, researchers, and even the
director of the Institute, Nils O. Andersen. I wrote a handful of them a note explaining I
was a novelist looking to write about a physicist working in Denmark but I had to make
him real. What kind of research might he be doing that year?

The only one who wrote me back was the director, Dr. Andersen, and he was fascinated
by what I was doing. I learned from him that the hottest research topic was in the
ultracold. He and others were exploring what happens to matter near absolute zero.
Atoms become a new form of matter called a Bose-Einstein condensate (BEC), which
turns out to be a really strange thing. Many known laws of the universe fall away when
atoms become BECs.

From there, I had to understand the simplest things about the subject, and I found a
great book called Absolute Zero and the Conquest of Cold by Tom Shachtman. I also saw
a great Nova program on Absolute Zero.

I ended up studying more and more history and even using physics textbooks to grasp
how quantum mechanics came about and played into BECs. There’s a wonderful play
called Copenhagen by Michael Frayn about Niels Bohr and Werner Heisenberg that uses
real science as background, which I found inspiring.

I called on Dr. Andersen several times, as well as scientists I found in America, such as
Dr. Sidney Nagel at the University of Chicago and Dr. Mark Saffman at the University
of Wisconsin, where I’d already decided Gunnar would be working. I knew the Midwest
well, having grown up there. Because my last novel, The Brightest Moon of the Century,
took place in Minnesota, this time it would be Wisconsin. Once I grasped the science,
then I used it to inform my characters.

This takes me to a truth I have about people. What a person does for a living colors the
way he or she looks at the world. Police officers who deal with the more twisted people
in society tend to look at anyone they meet with suspicion. Kindergarten teachers tend
to smile a lot because kids and people are inherently good. And scientists have a certain
sense of logic to them. The physical rules of the universe make things clear, and why
shouldn’t love be observed and quantified and understood?

As I explored quantum physics more and more, I came to understand how Gunnar
might view love from his angle of the way atoms in the ultracold behaved. Atoms in a
BEC no longer have an individual identity. They become a wave—a wave with properties
like no other wave. For me, this became a metaphor for love. Gunnar’s despair at
one point screams so overwhelmingly, it’s as if his soul joins the souls of other love-
saddened people, and they are a single unique wave racing through space.

To build on this, I started every chapter with an epigram, a law of physics that might
connect to the emotions that Gunnar experiences in that chapter. I didn’t expect most
readers to catch onto this—that it’s an extra, simply there for the taking. However, when
I gave my first polished draft to several trusted readers including my mother and father,
who are very intelligent readers, they didn’t get what I was doing with the epigrams.

My goal is to communicate, so with a few more drafts, I played with those epigrams,
moved them around in some cases or found better ones, and I hired a fantastic editor,
Lynn Hightower, who happens to teach fiction at UCLA Extension, as I do. She teaches
a master class in fiction where she makes her students outline their books after they’d
written a draft. As my editor, she suggested that some of my epigrams might go outside
of physics—to psychology or religion, for instance. Some might even be funny.

Hightower gets my humor, so this was what I needed. With her, I played more with

the epigrams. I cut out some chapters for pacing and added two characters, Gunnar’s
research partners, for more comic possibilities. The last thing I did is change the ending.
After all the drafts I did, I wasn’t happy with the end. It was too pragmatic, and if
Gunnar learns anything, love isn’t neat and tidy. The end couldn’t be true to scientific
logic, but it had to be true to love. In one clear vision, it came to me. I’m pleased that the
reviewers agree.

The science in the book is real, but it’s simply background in understanding who Gunnar
is. If plumbers and lawyers and hairdressers can fall in love, why not a physicist? It’s
meant to be a fun book, and if you learn something about the universe along the way,
that’s not so bad.


Thank you so much Christopher and Virtual Author Book Tours!
Be sure to check out the links below for more information and links to more reviews and giveaways:

I don't have a scientific mind at all but I totally understood the quantum physics in the book.