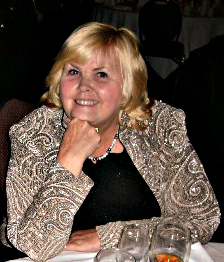 Connie (Corcoran) Wilson (MS + 30) graduated from the University of Iowa and Western Illinois University, with additional study at Northern Illinois, the University of California at Berkeley and the University of Chicago. She taught writing at six Iowa/Illinois colleges and has written for five newspapers and seven blogs, including Associated Content (now owned by Yahoo) which named her its 2008 Content Producer of the Year . She is an active, voting member of HWA (Horror Writers Association).
Her stories and interviews with writers like David Morrell, Joe Hill, Kurt Vonnegut, Frederik Pohl and Anne Perry have appeared online and in numerous journals.  Her work has won prizes from “Whim’s Place Flash Fiction,” “Writer’s Digest” (Screenplay) and she will have 12 books out by the end of the year.  Connie reviewed film and books for the Quad City Times (Davenport, Iowa) for 12 years and wrote humor columns and conducted interviews for the (Moline, Illinois) Daily Dispatch and now blogs for 7 blogs, including television reviews and political reporting for Yahoo.
Connie lives in East Moline, Illinois with husband Craig and cat Lucy, and in Chicago, Illinois, where her son, Scott and daughter-in-law Jessica and their two-year-old twins Elise and Ava reside. Her daughter, Stacey, recently graduated from Belmont University in Nashville, Tennessee, as a Music Business graduate.
Posted by Lori L at 7:00 AM

Thank you for sharing your story with us, Connie. Laughter really is the best medicine. It has gotten me through some rough spots as well as kept me sane.