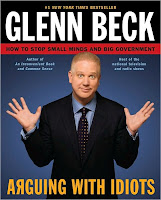 It happens to all of us: You’re minding your own business, when some idiot* informs you that guns are evil, the Prius will save the planet, or the rich have to finally start paying their fair share of taxes.
Just go away! you think to yourself—but they only get more obnoxious. Your heart rate quickens. You start to sweat. But never fear, for Glenn Beck has stumbled upon the secret formula to winning arguments against people with big mouths and small minds: knowing the facts.
And this book is full of them.
The next time your Idiot Friends tell you how gun control prevents gun violence, you’ll tell them all about England’s handgun ban (see page 53). When they insist that we should copy the UK’s health-care system, you’ll recount the horrifying facts you read on page 244. And the next time you hear how produce prices will skyrocket without illegal workers, you’ll have the perfect rebuttal (from page 139). Armed with the ultimate weapon—the truth—you can now tolerate (and who knows, maybe even enjoy?) your encounters with idiots everywhere!

My Thoughts:
Arguing with Idiots: How to Stop Small Minds and Big Government by Glenn Beck and Kevin Balfe is divided into twelve chapters including: In Defense of Capitalism, The Second Amendment, Education, America's Energy Future, Unions, Illegal Immigration, The Nanny State, Owning a Home, Economics 101, U.S. Presidents, Universal Health Care, and The U.S. Constitution. Each chapter covers a single topic and is packed full of facts. His arguments/replies are well researched. The book includes 25 pages of citations in very small print, something we all know I appreciate and look for, especially in a book of this nature.
In Arguing with Idiots, Beck poses statements, ostensibly spoken by the "idiots," and then responds to them with facts presented in a humorous, and sometimes sarcastic, manner. There are also little side boxes with extra information or "A.D.D. Moments." (Beck has freely discussed his A.D.D. on his show.)
Beck is sometimes looked at as a poster child for the Republican right, but he really is a Libertarian, a fact he would easily agree with. In the end it is highly unlikely that anyone's personal opinions will be changed by Beck's book. Very liberal people who would vehemently disagree with him would never pick it up, which means the reading audience of Arguing with Idiots would be basically composed of believers.
While I have enjoyed listening to his show in the past, I generally do better handling Beck's personality in small doses. What that meant was that while I liked the book and all the factual information presented as arguments, the sarcasm started to grate on my nerves. That aside, it is well researched and the pages are actually colorful and visually appealing.
Highly Recommended
Quotes:
Like O. J. Simpson, our free-market system seems to be put on trial at regular intervals. People love it until it stops working the way they think it should. Then it becomes the villain.
Wall Street was loved; then it was hated. Alan Greenspan was idolized; then he was demonized. People envied those who flew in private jets; then they despised them. It's amazing how quickly opinions can change, especially when people are looking to blame someone else for their problems.
The truth is that capitalism is neither good nor evil, it just is. Capitalism can't get you a job, a bigger house, or a better retirement -- you have to do all of those things for yourself. But what capitalism can do is foster an environment where those with the will to succeed have a better chance of achieving their dreams.
Do hardworking people still fall through the cracks? Absolutely. Are there peaks and valleys as excesses in markets are worked out over time? No doubt. But I defy anyone to show me another system that has done as much to quickly raise the standard of living and quality of life of a country as capitalism has for America.
You can't, because it doesn't exist. pg. 2-3
This [The Postal Service] might seem like an odd example, but it's actually a great study in how government meddling can prevent an organization from ever reaching its full potential.
In 1971, the "Post Office Department" was turned into a quasi-governmental corporation called the "U.S. Postal Service." The USPS is run by a board of eleven, with nine of those people appointed by the president (meaning they're not exactly independent of the political process).
There are other oddities, too. The USPS receives no government appropriations (good), but they have to adhere to a set of complex regulations that mandate each class of mail pay for itself (bad). They can borrow money by issuing debt (good), but all increases in mailing rates are decided by an independent body called the "Postal Rate Commission" (bad). They don't have to adhere to federal standards on employee pay (good), but they have a federally mandated monopoly on regular mail delivery (bad). pg.13
I'm glad you brought up the Patriot Act, because it's a good example of how the government is always able to expand its power during times of crisis. Our country's under attack! (Please let us eavesdrop on phone calls...) Johnstown is flooded! (Please let us tax alcohol to help the victims...) Our financial system will collapse! (Please let us nationalize a few banks...) And on and on and on.
Despite all of the calls for "more regulation" (which is really just code language for bigger government), we should remember that, once put on the books, regulations are virtually impossible to get rid of. You've heard of archaic "blue laws" before (it's still illegal for anyone 16 or older to yell at an official at a sporting event in Massachusetts) but those same kinds of outdated regulations also apply to business. pg. 21
...the government has no constitutional authority to be in the education business. How does that work for you?
Education is not a federal issue, it's a local and state one - which is exactly how it was treated for over two hundred years. Then, Jimmy Carter came along and, by the slimmest of margins (we're talking about four votes in the House), won approval to create a new ginormous government bureaucracy: the Department of Education (DOE). pg. 63
The victimization thesis says that, whatever our personal failures, shortcomings, and weaknesses, our troubles are caused by anyone and everyone except ourselves. It's not that people don't want to succeed; it's that they can't succeed. The deck is always stacked against us - and if you're poor or black or short or old or handicapped or female or gay or uncoordinated, then don't even bother trying. pg. 189
Posted by Lori L at 3:07 PM