In only a matter of days, 9/11 and the destruction of the Twin Towers will be rivaled by a lone-wolf terrorist attack on America. Atlanta is targeted as Ground Zero for the most horrifying plague in modern times.
Deep in the secret recesses of a Cold War lab, the Russians created tons of deadly bio-weapons. Now, decades later, a protégé of that Russian research is about to release weaponized Ebola into the heart of the South's most iconic city: Atlanta, where the symbols of American "decadence" range from a happily diverse population to the Coca-Cola museum and CNN building.
A preliminary test of the horrifying virus demonstrates the unspeakable suffering of its victims-and alerts the Centers for Disease Control that a terrible pandemic is in the making. CDC Virologist Dr. Dwight Butler begins a frantic effort to track down the source before it's too late.
For new BioDawn CEO Richard Wainwright, it quickly becomes clear that the "accidental" plane crash that killed the pharmaceutical company's entire executive hierarchy may have some connection to the evolving threat. Suddenly Richard is being stalked by a hit woman. He and Butler join forces to find the lone terrorist at the center of a plan that could unleash a modern Black Plague on the western world.


My Thoughts:
In Plague by H.W. "Buzz" Bernard many people's worst fears may become a reality: a terrorist with weaponized Ebola virus is planning an attack on the USA. Before he instigates his attack, he has to test his developed strain of Ebola to see if it will work, meaning if it will kill. While Dr. Dwight Butler at the CDC is investigating a mysterious Ebola outbreak that began with two golfing buddies, Richard Wainwright, a pro tempore CEO at BioDawn, begins inspecting the books of his new company and finds no information on a suspicious research unit. As Richard's inquiry into the mysterious unit begins, he is threatened by an assassin to just let it go and simply collect his large paycheck. That is not something Richard can do and soon he is running from the police while trying to uncover the truth.
Long time readers of She Treads Softly know how much I love a good plague book, fiction or nonfiction. In fact I noticed that I had read most of the same books for pleasure that "Buzz" Bernard read while researching this novel. The idea of an Ebola out break is seriously terrible and weaponized Ebola would be everyone's worst nightmare. Some people might be repulsed by the descriptions of what Ebola actually does to a person. It is gruesome, which is what makes the idea of a terrorist attack using Ebola so frightening. Ebola is lethal and if released in the USA today it would certainly spread across the globe becoming a global pandemic of apocalyptic proportions.
Plague isn't a complicated novel with many plot lines. There is essentially one story but many details that need to be discovered if there is a hope of stopping the terrorist attack. I found Plague to be a well written novel  as well as extremely readable and entertaining. For me the main characters were well developed, especially for a action novel of this length.
In the end, for me, Plague is a great action/adventure thriller that I thoroughly enjoyed. I now need to get a copy of "Buzz" Bernard's first novel, Eyewall, because I love novels based on meteorological events too.
Very Highly Recommended for sheer escapism. 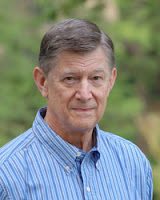 H.W. "Buzz" Bernard is an Air Force veteran and retired Weather Channel meteorologist. His 2010 hurricane thriller, Eyewall, became a number one bestseller in ebook.
Disclosure: My Kindle edition was courtesy of Bell Bridge Books and Netgalley for review purposes.

In only a matter of days, 9/11 and the destruction of the Twin Towers will be rivaled by a lone-wolf terrorist attack on America. Atlanta is targeted as Ground Zero for the most horrifying plague in modern times. Alnour Barashi stared down from the window of the Sun Dial Restaurant, 73 floors up in the Westin Peachtree Plaza, at the weekend throngs below. At the crowds strolling through Atlanta’s Centennial Olympic Park, people perhaps headed for the CNN Center, the massive Georgia Aquarium or the World of Coca-Cola. Americans, a nation of infidels. He imagined all of them—men, women, children—writhing in agony. Dying. His determination and patience had been rewarded. The prize: a recombinant Ebola virus as easily transmittable as the common cold. It was something known in the field of microbiology as a chimera virus, named after the mythological fire-breathing creature with the head of a lion, body of a goat and tail of a snake. Location 2-8
David Gullison stared into the bathroom mirror, terrified by what he saw. Someone he didn’t know, someone he’d never known. There was something almost demonic about his image. His eyes swam in crimson. Dead rubies. His face, flushed and splotched with tiny scarlet blooms, gave the appearance of Edelweiss gone bad. He looked the caricature of an aged, hard-drinking Irishman. But he knew it wasn’t age or booze. It was much worse than that. The pain came again, squeezing his gut, wrapping around his chest. It had started suddenly a couple of days ago. At first it was just his back. “Too much golf,” his wife said. Location 51-56

He smiled, or at least imagined he did. His face, he knew, rarely betrayed emotion. Perhaps the world would never be aware of his genius, his accomplishment, his lethal bioengineered virus, but Allah would, and Allah would be pleased. Location 134-136

Now, Barashi mused, it would be America’s turn. Payment had come due. For its arrogance, for its imperialism, for its brutality. For its dismissal and humiliation of us. For its crusade to project its values onto our culture and our religion. But no more. Of that he was certain. He held the power: the Black Death of the 21st century.  Location 146-148
“I’m sorry, Mrs. Gullison, I’m truly sorry. We did everything we could, but he was just too far gone. We tried to defibrillate him, but there was zero response, absolutely nothing. It was as if his heart had disintegrated. All his other organs had failed, too, kidneys, liver, lungs, everything.” Dr. Willand shook his head, partly in sympathy, partly in disbelief. Location 191-193
Dwight Butler, a virologist in the Viral Special Pathogens Branch of the CDC sat sequestered in his office. He’d been called in on an emergency. Now he remained there late in the day because he was—he could think of no other way of putting it—scared sh*tless. Location 214-216
“I gather you’re about to lay some serious sh*t on me.”
“Think of it as an elephant dump.”
“You’d never pass up an opportunity like that, would you?”
“We’ve got Ebola in Atlanta.” Location 250-252
“The samples that came in from North Georgia Regional Hospital earlier today, they tested positive for Ebola.” Again silence.
Then, “Are you sh*tting me, Dwight? This isn’t one of your ‘let’s yank the boss’s chain’ little antics, is it?”
“I wish it were. I ran an ELISA on the blood sample. It came back positive for Ebola antigens—”
“It’s a nonspecific test, you know that. Ebola antibodies have shown up in the blood sera of Native Americans in Alaska, for Christ’s sake, people who’ve never been anywhere near Ebola or vice versa.”
“I did a PCR, too.”
“And?”
“That’s what scared the crap out of me. The genetic structure looks a lot like Ebola-Zaire and a lot like Ebola-Reston. Zaire, as lethal as hell to humans; Reston, lethal only to monkeys.” Location 253-259

“It’s okay if you’re a little scared.” “It wasn’t for myself . . . what happened in there,” Dwight said, annoyed Zambit had brought it up. “I know. It’s for what it might mean for everyone. Let me say it again, it’s okay if you’re a little scared, because I’m petrified.” Dwight nodded, then in a whisper said, “And there before me was a pale horse.” Location 305-308
But he sensed something contradictory about her, something both alluring and forbidden. Maybe even dangerous. One of his strengths as a CEO was in evaluating people, and he instantly judged he should tread carefully around this woman. Location 342-344
After several moments, she expelled a long breath and said, “I’m not sure the plane crash was an accident. Tony said there were some things going on at BioDawn . . .” Her words trailed off abruptly, but just as quickly she resumed speaking, moving the conversation in a different direction. “Could we meet for lunch, Mr. Wainwright? I’m uncomfortable talking about this on the phone. Maybe a little frightened, too. Look, when I tell you what I know, which may not be much, but probably enough to raise some eyebrows, I want you to see me, look me in the eye. So you’ll know you’re not dealing with some grief-stricken, whacko conspiracy theorist. Would that be okay?” Location 416-420

Remember the kind of death we’re talking about here. Not a gentle passing in the night. A descent into the Ninth Circle of Hell. ‘Abandon all hope, you who enter here.’” Location 1046-1047
Posted by Lori L at 5:58 PM