I Am Lucky Bird


When her mother AnnMarie mysteriously vanishes from the small town of Plains, Montana, 12 year old Lucky Bird's childhood comes to an abrupt end. Left alone to defend herself against her suddenly abusive grandmother Marian Bird, and forced to endure the twisted predatory game played by Marian's lover Tom Cressfield, Lucky's life soon descends into a nightmare.
Even when she manages to escape, the outside world can't take away the brutal images of her past. Still haunted by her mother's disappearance and the trauma that followed, Lucky is easily led down a path of self-destruction, a path that only the intervention of a handsome young stranger and his family seems to offer any hope of guiding her away from. But first, she will have to confront her demons, and the dark truths that they kept hidden...
The literary debut of brilliant new author Fleur Philips, MFA Creative Writing student at Antioch University Los Angeles, I Am Lucky Bird is an intensely gripping, heart-wrenching novel, telling the tale of Lucky Bird through her suffering, her long, hard-fought struggle against strife and adversity- and, in its breath-taking climax, of Lucky Bird's inspirational triumph, as she finally uncovers the sinister secrets behind it all...


My Thoughts:
I Am Lucky Bird by Fleur Philips introduces us to Lucky Bird, a young woman living in Plains, Montana. The closest person to being a mother to Lucky, Ann Marie, cares for Lucky until she mysteriously disappears when Lucky is twelve. Lucky is then basically left to fend for herself, albeit with visits from Marian Bird, the woman she considers her grandmother. Marian drops off groceries, as well as verbally abuses and terrorizes Lucky, at least once a week. And then there is Tom, Marian's creepy boyfriend...

Lucky is most certainly an abused and neglected child in most of this tragic novel. Lucky does make a friend, a new girl to Plains, Rika, and soon the girls grow close and make plans to escape from Plains. Before they can escape, another horrible tragedy befalls Lucky and her life is once again in turmoil.  As the novel continues, Lucky's life is the opposite of what her name implies. Even when she does manage to get out of Plains her life continues to spiral down, out-of-control
Even though it is set in Montana, I Am Lucky Bird captures the essence of tragic Southern coming-of-age story, like Bastard out of Carolina. It has also been favorably compared to White Oleander. And, though it might be considered a YA novel, it handles some very dark, adult themes, so it would be for those on the older age span of YA fiction.

Fleur Philips is an excellent writer. I Am Lucky Bird  is beautifully written debut, even while the subject matter is difficult to read. She did a notable job giving Lucky a distinctive voice. Even when Lucky is at her lowest, I empathized with her because I understood what she was thinking, even when her decisions were poor choices and lead to more heart break. I Am Lucky Bird  should be adapted to be made into a movie. Some of the elements, especially the tie-in with birds, could be beautifully captured in a movie.
Now, I do have one small complaint about the ending. Do not read beyond this point if you are going to read the book - and I'm going to very highly recommend that you do just that. I will try to be vague just in case you continue.
The very end of the novel ties up loose ends for sure, but it also went too far in the other direction for me. For Lucky to get answers about her past and have some closure was all exceedingly good and satisfying and right. But, when she also came into even more overwhelmingly good things, well, that took it just one step too far for me. I would have ended with the closure and avoided the and-there-is-even-more-fabulous news ending. (I hope that was vague enough to not spoil too much.)
Very Highly Recommended -  Don't miss the giveaway found after the quotes! 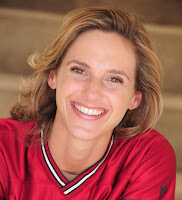 Fleur Philips is a graduate student at Antioch University in Los Angeles, pursuing her MFA in Creative Writing. She attended the University of Oregon in Eugene where she was awarded placement in the Kidd Tutorial Creative Writing Program. After a short-lived acting career (she was a “featured extra” on Steven Spielberg’s Catch Me If You Can), she completed three manuscripts. I Am Lucky Bird is her first novel and was selected as a general fiction finalist for the 2011 Book of the Year Award from ForeWord Reviews. She’s currently working on her second novel which will be released in the summer 2013. She lives in Upland, California, and when she’s not writing, she’s cheering for her son in his athletic endeavors.
Disclosure: I was given a copy of this book BookSparksPR for review purposes.
Quotes:
My existence was just one of the many tragic events in the life of my grandmother, Marian Ann Bird. She told me she found me in an empty cardboard box next to an industrial garbage bin in the alley behind the Green Valley Bar in Plains, Montana. opening
I never called AnnMarie by anything other than her first name. She was, in a sense, my mother, but I always considered her to be more like a sister, and this was only because we lived together. pg. 1
It was later that evening, while AnnMarie sat on the edge of my bed carefully brushing through the twisted tangles of my long brown hair, that she asked me not to tell Marian about what I saw in the kitchen.
"He stayed outside and I brought him the envelope, okay?" she said.
"Okay," I replied. pg. 6
The silence around me was so thick and heavy that at one point I thought my eardrums might actually explode.
And then I was so completely terrified I couldn't move. I couldn't close my eyes. I couldn't even breathe.
I waited. AnnMarie didn't come home. pg. 13
throughout the day, I'd convinced myself that everything would be okay. But at that moment, I knew my life would never be the same. What I didn't know was just how horrible it would become. pg. 21
From that moment on, reading became her life. The characters in the books she read may not have been tangible in this world, but they were living and breathing in another dimension outside of the one AnnMarie physically walked in, and in that realm, they were close enough for her to touch and feel. pg. 25
She still spent most of her time at Tom's, but when she did return home, it was for the purpose of hurting me. pg. 32
Something dark and evil was lurking on the horizon, and when I looked out across the river, I saw a storm in the distance, twisting and writhing like a room full of snakes. I was 14 years old - too young to truly understand he threat that lingered, but old enough to know the fear I felt was terrifyingly real. pg. 43


(The giveaway has ended and the winner has been notified.)