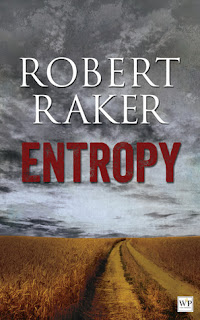 
Entropy by Robert Raker is a highly recommended murder mystery told from four different viewpoints.
A serial killer is on the loose and the brutal child abductions and murders are taking a toll on law enforcement, the community, and individuals. In Entropy Robert Raker focuses on four different individuals who have a connection to the crimes.

The four people who share their story and connection to the murders starts with a scuba diver who is recovering the bodies which are all found in water. The second voice is of a disfigured musician who thinks he knows who is responsible. The third narrator is a federal agent who has been assigned to go undercover and get into the mind of a pedophile. The final narrator is the mother of one of the victims.

Each narrator shares their life, their struggles, their losses, their inner thoughts and torments while we learn about their tie-in to the horrific murders. They are all isolated individuals, living lives of quiet desperation and are remote and distant even from their partners. They don't openly share their thoughts and feelings with anyone so their inner pain and turmoil is intensified.

Raker does a brilliant job developing his characters and showcasing their pain and isolation as they deal with their connections to the murders. The language he uses is expressive, even poetic at times. The quality of the writing overcomes several of the flaws I found with the novel, with the major flaw being the lack of a solid conclusion. I understand the artistic choice to present the plot via the four individual narratives, but I was left wanting some semblance of closure, even if it was a fifth character brought in to provide the denouement.

I would imagine that most readers will likely find one of the narratives more powerful than the others, but together the stories of these four individuals create an impressive crime novel.


Disclosure: My Kindle edition was courtesy of Wattle Publishing for review purposes.