Keep Her Safe by Sophie Hannah 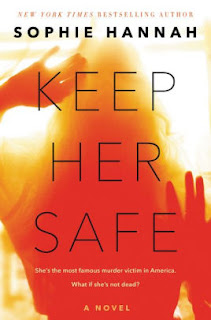 Keep Her Safe by Sophie Hannah is a recommended thriller.

Cara Burrows runs away from her home and family in England for an expensive resort and spa in Arizona. When the clerk mistakenly gives her a key to a room that is already occupied by a man and a teenage girl, Clara is upgraded to a bungalow. The next day Cara overhears another guest claiming to have seen the mysterious Melody, a girl whose parents were convicted of her murder seven years earlier. Then detectives come to halfheartedly investigate the sighting. Cara decides to get online with the spa-provided tablet and research the story of Melody Chapa.

While reading about the case of infamous American murder victim, Cara suspects that the teenage girl she saw and heard the first night, in the room she mistakenly was given the key to, was Melody. She discusses her suspicions with Tarin Fry and her daughter, Zellie, along with the staff. She asks to see the detectives, but disappears before she can tell them what she saw and heard.

Keep Her Safe is entertaining when the backstory of the Melody Chapa case is discussed. The theories and investigation of the case combined with the occasional excerpts from the writing by some unnamed girl hook you into the mystery. However, you also have to suspend a whole lot of disbelief to keep reading and believing in the plot. It helps that Hannah is a good writer so there aren't technical flaws. There are other flaws.

The reason given for why Cara ran away from her family to a place she couldn't afford was unbelievable. Really. You're going to think there must have been more to it, but there isn't. And, honestly, it made me respect her less as a character. The whole paying a stranger to hold her cell phone for her was ridiculous/stupid. The plot is kind of silly. Bonnie Juno is a joke. Allowing only local cops, resort management, Juno, and guests to meet and talk about the sightings of Melody and the disappearance of Cara and another person was implausible.  And, yet again, the character of Tarin Fry is a florist from Lawrence, Kansas. Really? (Novelists, please stop pointing at a map and deciding that Lawrence, KS looks like a good place to have an unlikable character live. I'm starting to get a complex about this. Please consider some other places in fly-over territory.)

I'm recommending Keep Her Safe because I read it to the end and was entertainer by it, even when there was a wee-bit of eye rolling over some of the details.