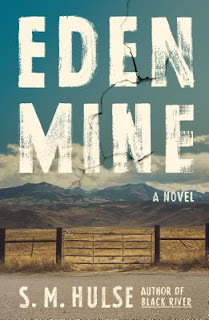 
Eden Mine by S. M. Hulse is a very highly recommended novel that examines the aftershocks of an act of domestic terrorism in a small Montana town. This eloquently written, artistic novel is one of the best novels I've read so far this year.

It is a Sunday morning and Josephine (Jo) Faber is packing up the home that she and her brother Samuel inherited near Eden Mine in Montana. Their home has been seized by the state through eminent domain. While packing she learns about the bombing of the district courthouse at Elk Fork on the radio, but it is not until friend and unofficial guardian Sheriff Hawkins shows up at her front door that she realizes something is wrong. Hawkins wants to know where her brother, Samuel, is. As far as she knows, he left that morning to go find work.

When Jo is told that Samuel was caught on a security camera near the court house, she knows he is likely responsible. The tragedy is that a church was meeting in a nearby store front and the bomb blast blew out the window. Now a nine-year-old girl, the daughter of the pastor, is in critical condition. Jo knows that Samuel would never have meant for anyone to be placed in harm's way because of their family history. He has been taking care of Jo since he was 17 and she was 10.

Eden Mine is a finely crafted, nuanced, and beautifully written heart-breaking novel about family bonds, loyalty, love, individual freedom, injustice, the testing of faith, and redemption. It also touches on the anger, injustice, and disaffection tearing apart many communities. The novel is told mainly through Jo's point-of-view, with short chapters from Asa Truth, the pastor whose daughter is hospitalized, and Samuel, who is in hiding and writing to Jo on a map he has with him. The complete backstory slowly unfolds over the course of the novel, making what happened more nuanced and complicated that it would appear to be at first.

All of the characters are well-developed, complicated individuals. Hulse captures these damaged people and their thoughts, feelings, and struggles with an acumen and sensitivity that makes the story richer. The inner thoughts of the characters will resonate with readers. Some of the questions that Eden Mine raises are those that are struggled with almost universally. A case could be made that the novel is allegorical and reflects human struggles Biblically. In the end this is an eloquently written, touching novel that will stay with me for years.
Disclosure: My review copy was courtesy of Farrar, Straus and Giroux.
Posted by Lori L at 4:44 PM