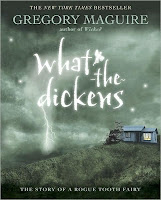 What-the-Dickens: The Story of a Rogue Tooth Fairy by Gregory Maguire was originally published in 2007. My hardcover copy has 295 pages. This is an easy to read novel recommended for grades 5-8. I found this book in the clearance section of my local used book store and picked it up simply based on the premise that a "rogue tooth fairy" would be in the story. The rogue tooth fairy is presented in the story told within the novel itself. In What-the-Dickens, ten year old Dinah Ormsby, along with her older brother, Zeke, and almost two year old sister, Rebecca Ruth, are riding out an awful storm with their twenty-one year old cousin Gage. Gage decides to tell them a story to keep their minds off the storm, a story about What-the-Dickens, a "lost" skibbereen, or tooth fairy.

What-the-Dickens can be reviewed in two ways, either as a story for the intended age group or as a novel adults will be reading. If I were to review this book for adults, I would agree with other reviews that say the main story, framing the tooth fairy tale, is weak and it has a host of other problems. But, as a 5th grader the storm story would be a perfectly logical way to lead into the fairy tale part. I really rather enjoyed it.... with the exception of Maguire's apparent hint of animosity toward homeschoolers, as shown in the quote below, which I'm chalking up to pure ignorance on his part. (Come on writers, educate yourself before you write about or think it's cute to mock a group of people.) I guess, if you want a Maguire book for adults, pick up Wicked or Mirror, Mirror. This one's for the kids. I'm rating What-the-Dickens a 3.9 and recommend it to the young side of it's intended audience, 5th graders. However, I'd likely recommend The Borrowers to the same group before What-the-Dickens.
Synopsis from cover:

"On the darkest night, amidst a terrifying storm, Dinah's parents go missing. While anxious Dinah and her brother and sister worry and huddle for warmth, their cousin Gage tells them an unlikely story - about tooth fairies, known as skibbereen, who are living in warring colonies right in the neighborhood. According to Gage, the skibbereen put those teeth to good use. And Gage has meet them. Dinah is skeptical, but as the story unfolds and the storm rages on, she begins to believe.

By turns touching and comic, What-the-Dickens is a decidedly imaginative journey into myth that could only have been penned by that premier interpreter of the fairy-tale world, Gregory Maguire."

Quotes:
"By evening, when the winds rose yet again, the power began to stutter at half-strength, and the sirens to fail." opening sentence.

"The Ormsbys sequestered themselves in a scrappy bungalow perched at the uphill end of the canyon, where the unpaved county road petered out into ridge rubble and scrub pine." pg. 5

"Dinah and her big brother, Zeke, were homeschooled. This they were frequently reminded, kept them safe, made them strong, and preserved their goodness." pg. 5

"Dinah was glad that they'd pushed the sofa against the front door as a protection against burglars. This left plenty of space in the middle of the room to play picnic or Israelites in the desert of the Donnor Party." pg. 5-6

"Skibbereen are never seen by humans. Didn't your mother ever teach you anything?" pg. 89

"And when Edith read her story....the first lone skibberee, the First Fairy, the foundress of our species, listened to it. From whatever realm of faerie she had accidentally blundered, she had to make herself up anew in this new world. So she listened hard. And she began to evolve, because stories work their magic that way. They build conviction and erode conviction in equal measure." pg. 114-115