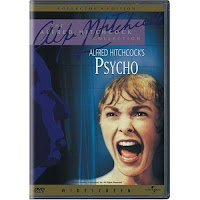 My friend Amy's the Summer of Hitchcock.

Alfred Hitchcock in the transcript for the documentary "The Making of Psycho":

Good evening. I have some news that will delight you. Murder is not dead. I do not refer to the ones splashed all over the front pages. Those are in such bad taste. I refer to those exquisite murders that have a touch of the bizarre and which take fiendish ingenuity to solve. Those are alive and well. One will be presented for your shivering delight immediately.

I was surprised to learn that Hitchcock wanted to film Psycho in black and white because he wanted to make a low budget movie for under a million dollars (it only cost $800,000 to make). Additionally, he felt it would be too bloody in color. It's still impressive how he made the shower scene horrific and memorable without resulting to the gory scenes you would likely see in most other horror movies. Psycho still proves that in a good horror movie the gore and violence should always be secondary to the real terror found in the telling of the story.
Since I have seen Psycho several times before, I was also quite aware of how the musical score by Bernard Herrman really influences you when you watch the action in the whole movie. At the beginning, when Marion is running, the music makes you feel hurried, nervous, tense that something is about to happen, for example with the police officer following her. Compared to the tension created by the cop, Norman seems socially awkward, but safe.
Psycho still has the power to terrify you even when you know what's going to happen.

All those who still get a chill every time they step into a hotel shower, say aye. That, you see, is the power of Psycho. - Salon.com