Breaking news: Movie Dude got a Snuggie, which he brought along for movie night.
Movie Dude, speaking of the open back: It's too bad you can't go natural wearing a Snuggie.
Uh-huh, and now the movies.

Warriors of the Wasteland (1982) aka The New Barbarians 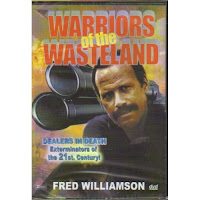 The year is 2019 in a post-apocalyptic future, a group of weary survivors is faced with a relentless onslaught from a gang of roving bandits. Into this conflict comes two men, rivals by nature, but forced to take the same side against a common foe. The survival of the human race may very well come down to the outcome of this battle!

Just Me's first movie pick, Warriors of the Wasteland is a grindhouse, spaghetti sci fi. It was a truly awful film that was seriously influenced by Mad Max but also Escape from New York, Star Wars (use that hate), and perhaps even Star Trek (sound effects). It would be fun to watch it again and start writing down all the different movies that influenced it. One of the bad guys, from the group called the Templars, ripped a book in half at the beginning of the movie saying something like, "Books. They are the cause of this whole apocalypse." The Templars at one point in the movie chanted "Hate and Exterminate" (Dr. Who influence anyone?) There was super cool midi music and neato sound effects. Just Me certainly knows how to pick 'em! (The movie is rated R, but would certainly be a pg13 today. The violence was more laughable than gory and there was some peek-a-boo almost nudity.) This is so bad that it's highly recommended.

Just Me: I wonder if they had toilet paper.
Lori: After the apocalypse?

An undercover policewoman helps three female convicts escape from prison so that they can lead her to a stash of stolen diamonds hidden in a swamp.

Movie Dude choose this movie based, I'm sure, on the title and that fact that it starred a young Mike Connors, known as Touch Connors in this film. It was pretty slow so it was abandoned once Just Me and Movie Dude read (yes, they were Googling while watching) that Robot Monster was even worst that The Beast from Yucca Flats (one of our all time favorite bad movies.)

Just Me: Are you making me go to weird sites again?
Movie Dude: It's completely legit - Horror Host Graveyard.
Movie Dude: I wonder how you get a job as a horror movie host.... 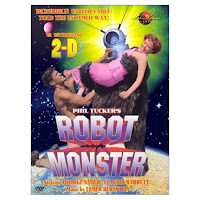 The Robot Monster has been sent to Earth as the advance party of an impending invasion. Ordered by The Great One to capture several humans, the Robot Monster becomes confused once it learns more about humans.

We all agreed that Robot Monster was not the worst movie ever made. It has a super cool alien who looks like a guy in a gorilla suit with a diving helmet for a head (the Ro-Man) who has wiped out the whole population of the earth, with the exception of one family of hu-mans. Plus he has a bubble machine. How can a movie with a bubble machine in it be bad? Oh, and the Ro-Man communicates with his superiors through old surplus WWII radio equipment. You know what, the plot doesn't matter. This is a truly great awful movie.

The last movie of the evening was another Just Me selection: 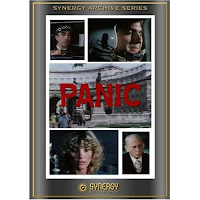 A scientist's experiment with a deadly bacteria goes awry and leaves him horribly deformed. The monstrous man then runs amok in his town. Filmed in Italy and Spain.

OK. This is an awful movie, although it was fun to watch. It's an Italian film, the actors dialogue was dubbed in English, but it was filmed to make you think it was set in Great Britain. The continuity was lacking and the plot dropped all sorts of potentially interesting threads. Really, if you didn't know from the description what was supposed to be going on at the beginning, you would have a difficult time following the movie.

Movie Dude (from scenes at the beginning): Did I just see a monkeys....
(He didn't)

While watching Movie Dude commented that David Warbeck, the New Zealand born actor who played Captain Kirk (heh, heh, heh) in the movie would have made a great James Bond. Guess what? Trivia from IMDb said that David Warbeck "was on the (exceedingly) short list to be the third James Bond, in Live and Let Die (1973), until Roger Moore was able to spring free from TV commitments."
Cool.
Posted by Lori L at 12:39 PM