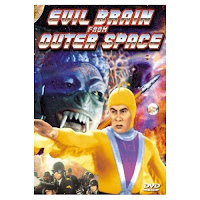 
A monstrous evil brain from outer space leads his minions on a crusade to conquer the universe, and unleashes hideous monsters on Earth that spread deadly diseases. Superhero Starman must rescue Earth from the menace of the evil brain while battling armies of monsters the brain sends against him.(IMDb) Known as Super Giant in his native Japan, Starman's trademark is a blend of frantic action and primitive special effects. 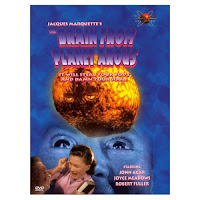 rain From Planet Arous (1957)
Starring: John Agar, Joyce Meadows
Director: Nathan Juran
A powerful criminal brain from the planet Arous, Gor, assumes the body of scientist Steve March. Thru March he begins to control the world by threatening destruction to any country challenging his domination. Another brain, Val, works with Marchs future wife Sally to defeat Gor. Val explains that Gor will be vulnerable when he is forced to leave March at intervals to re-energize. Gors vulnerable spot, the Fissure of Rolando, is described in a note left by Sally in Steve's lab.(IMDb)

We had planned a long theme night of movies featuring brains (we were surprised to discover we have at least 6 movies featuring "brain" in the title) but an unfortunate incident cut our enthusiasm for brain movies short.
Posted by Lori L at 11:55 AM