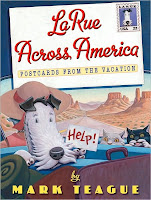 Bestselling, award-winning author/illustrator Mark Teague makes readers laugh aloud when LaRue goes on vacation with Mrs. Hibbins's cats! Ike's plans for a peaceful cruise with Mrs. LaRue are thwarted when their neighbor, Mrs. Hibbins, falls suddenly ill from heat stroke. Mrs. LaRue suggests that she and Ike care for her cats while Mrs. Hibbins is in the hospital, inviting them along on the cruise. But cats aren't allowed, and Mrs. LaRue decides to take them all on a week's vacation of road-tripping. Ike begs and begs for bus fare in his letters to Mrs. Hibbins, but why does she not respond? As they drive farther and farther from the coast, his wistful dreams of a cruise fade into desperation over the desert horizon. Ike complains he is low on bones, and Mrs. LaRue is almost out of patience. It now seems that nothing short of an empty gas tank can bring this horror show of a road trip to a haulting stop. But then what?

LaRue Across America: Postcards From the Vacation by Mark Teague is one of a series of books featuring Ike LaRue, a dog, his owner Gertrude LaRue, and the (horrid) cats who live next door. In this book, the cat's owner, Mrs. Hibbins, needs to be hospitalized due to a heat wave. Mrs. LaRue offers to care for her cats. She cancels her planned vacation, an ocean cruise with Ike, and replaces it with a cross country trip by car. Ike immediately starts sending postcards to Mrs. Hibbins in an attempt to get rid of the cats.

This book is hilarious and the illustrations are wonderful. Teague has Ike picturing the way he remembers the event in black and white (since dogs are colorblind) while the real scenes are in color. It's a nice juxtaposition. The endpapers include a map of the United States with their route marked. Ike's self-delusion while he thinks he is covering his true motives should be obvious to children in the target age range, 4-8. (The Lexile score is AD900L, so it's based on adult directed reading.)

I do have one nagging question running through my mind, however. Do people still write postcards? It occurred to me that having Ike send email pleas might be more current than postcards. Certainly most children would now understand email messages.

I am passing this gem of a book along to my niece and will add any of her comments about it at a later date.

(disclosure: I won this in a giveaway at http://webereading.com/ which I entered just because I thought my niece would enjoy it.)
Posted by Lori L at 2:47 PM