In anticipation of the review of  It Came From the 70's by Connie Corcoran Wilson, here at the home of She Treads Softly we decided to revisit some 70's movies.
Our first choice was Logan's Run. 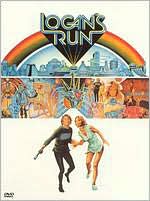 Logan's Run, 1976
Director: Michael Anderson
Cast: Michael York, Richard Jordan, Jenny Agutter, (also Farrah Fawcett and Peter Ustinov)
Set in 2274 in an automated computer run city within an enclosed dome, the young inhabitants of the city pursue life's pleasures. The one drawback to their youth oriented hedonistic society is that at age 30 you must participate in a ceremony called Carousel. Although the citizens are told it is for renewal, they are actually terminated. Those who try to escape are called runners. It is the job of  a Sandman to track them down and kill them. Logan 5 is a Sandman. The personal property he turns in from he last runner he killed sets into motion orders from the city/computer that he needs to become a runner himself and search for "Sanctuary." He turns to a young woman he met, Jessica 6, to help him find Sanctuary. They are pursued by his friend and fellow Sandman, Francis 7. 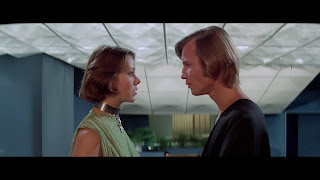 First, I must admit that 70's movies are the movies of my life during high school and college, so this was nothing but fun for me.
While this was pure nostalgia for me,  the other Movie Dude viewers had a great time commenting on how 70's the whole movie looked. Choice comments from the evening included:
"How very 70's to envision that the future lies in spandex tights and body suits."
"And, honestly, who doesn't like to lounge in a caftan?"
"The entire city looks like a mall."
"Any excuse to get naked... How many times has Logan suggested that they take their clothes off? Logan is all about taking off the clothes."
Posted by Lori L at 12:20 PM

I like revisiting 70's movies! We watched the Airplane movies last year. Pretty funny. Wait, they weren't supposed to be funny. LOL
I vividly remember watching the one (not recently, but back in the day) where they put baloons under the plane to bring it up out of the water. Back then, it seemed so intense! LOL! Oh, the music!
This last week we have been watching some classics from the
60's. We watched Marry Poppins, Chitty Chitty Bang Bang, & Herbie the Love Bug. LOVED watching Mary Poppins again. Chitty Chitty wasn't as good as I remembered, & Charlie laughed all through Herbie. He LOVED it!
I thought we had The Apple Dumpling Gang somewhere on an old tape. If I can find that one, it's next.

Oops, that should be balLoons. LOL


Also, I meant to say that in the 70's the spandex tights and body suits were the future...they were the 80's!! LOL

Oh.My.Gosh.
You wouldn't BELIEVE the word I have for "word verification" to post this comment! I'll tell you elsewhere....LOL

Oh no - that just looks horribly bad on soooo many levels! It is funny that the 70's movies I grew up watching and finding perfectly entertaining and reasonable at the time have large limits of forgiveness from me now. Those that I didn't catch at the time and view now looking back? Not so much ;0)

Oh man. I meant AIRPORT!
Like Airport 77, Airport 78, & Airport 79.
Not Airplane! Yeah...that WAS supposed to be funny.
LOL
And don't call me Shirley! LOL...
I really should proof read more often.