The Poison Secret by Gregg Loomis 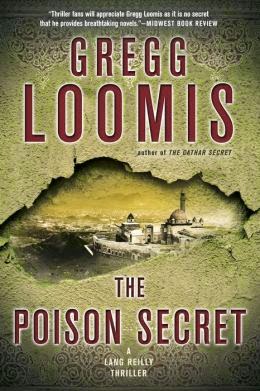 In the year 88 BC, King Mithradates of Anatolia died suddenly after an apparent poisoning. His son, Prince Mithradates, then disappeared for seven years into the woods where he collected hemlock plants and other deadly poisons. Upon his return, he shared a fatal meal with his mother and brother. Mithradates, who ultimately became King, somehow left the meal unharmed.

In modern-day Turkey, a young boy endures a bite from a venomous viper. His doctor reports that the child experienced no ill effects and suggests the existence of a universal immunity in his blood, possibly as a descendant of Mithradates. And then the battle over his blood sample begins, attracting vigilantes who will stop at nothing to get their hands on the immunity. They even go so far as to steal young boy’s hematology reports—and then murder the doctor who made the discovery.
Word of the discovery made in his Holt Foundation children’s hospital quickly spreads across continents to Lang Reilly. Lang decides he and his wife, Gurt must travel to Turkey to get to the bottom of these tragic events. Soon after arriving in Trabzon, Turkey, Lang’s house is burglarized, his rental car is attacked by phony police officers, and his wife is abducted from their hotel room by members of the Turkish mafia. Lang’s life is not the only one in danger, and he must work fast to gain possession of the immunity before it is too late.

The Poison Secret by Gregg Loomis is a highly recommended thriller that will hold your attention from beginning to end.

The chapters alternate between the present day and the past. The story from the past goes back to 88 BC and tells the story of Prince Mithradates and his immunity to poisons.
In the present day in the Holt Foundation children’s hospital in Trabzon, Turkey, a young boy is discovered to possibly carry the genetic code for universal immunity. The folk stories about a family that carries a universal immunity go back in time:
"But the tales I had in mind were about a family who lived along the coast here a long time ago, a family who had some sort of immunity.”
“Immunity to what?” Fatima demanded.
“Just about everything or, at least, to known poisons.”
“And you think this child is one of them?”
“Fatima, I don’t know what to think. All I now is the blood of this child is as full of antidotes, anti-toxins and immunities as kuru fasuly is of beans. I do know I’ve never seen anything like it nor have any of the hematologists I know.”

Naturally, a sample of the boy's blood is sent to the Holt Foundation in the USA. The information about the boy and possible universal immunity is stolen and then the information is offered for a price to a pharmaceutical company:
“Gentlemen,” Grassley interrupted, “let’s look at a few facts: First, if this information is even close to accurate, that someone has discovered anything approaching what this man claims the correspondence says, five grand is nothing. The first company to get FDA approval of such a drug will make Viagra look like peanuts. Second, as you know, Dystra Pharmaceuticals has been limping along the last few years, producing generics once a drug’s patent expires along with half a dozen of our competitors. Mere crumbs from the big boys’ table. If we could get our hands on this serum or whatever it is . . . Well, move over Pfizer, get out of the way, Merck. Hell, this could be as big as Aspirin.”

The battle begins for possession of the blood sample and the name of the boy. Possession of both proves to be worth killing anyone who stands in the way. Paperwork is stolen and a doctor is killed over the information which sends the head of the Holt foundation, ex-CIA agent and practicing attorney Lang Reilly and his wife Gurt, a former German agent, traveling to Turkey in an attempt to find some answers.

Loomis keeps the action swiftly moving in this riveting seventh thriller featuring Lang Reilly. I know I haven't read all the Lang Reily novels but that didn't detract from the sheer enjoyment and escapism found in this latest offering. Loomis sets up the premise of the story in a credible way, and then delivers the goods. He keeps the plot moving forward, and the action rolling without  lecturing the reader about greedy drug companies. That's not to say that credulity isn't stretched from time to time, but that's part of what makes for a great international thriller. This would be a good stuck all night at the airport book or a great way to pass a cold, snowy evening.


Disclosure: My Kindle edition was courtesy of Turner Publishing for review purposes.