The Hand That Feeds You

The Hand That Feeds You by A.J. Rich 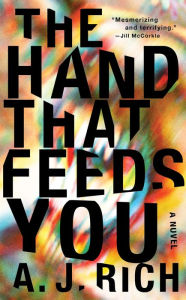 The Hand That Feeds You by A.J. Rich (Amy Hempel and Jill Ciment) is a recommended psychological thriller.


The last thing 30 year old Morgan Prager, a student completing her thesis on victim psychology, expected to find when she came home from class was her fiance Bennett mauled to death in her apartment. She sees her dogs, Cloud, a Great Pyrenees she has raised from a puppy, and two pit bulls she has rescued, covered in blood and it seems obvious that they are to blame. Morgan, fearful her dogs may decide to attack her, locks herself in the bathroom and calls 911. Then she completely falls apart. When the police arrive they shoot one pit bull and take Cloud and the other dog into custody. Morgan is sent to Bellevue.

After a few days at Bellevue, Morgan is able to talk to a psychiatrist and answer some questions from the police. Apparently Morgan met Bennett while working on her thesis. He responded to a profile she set up on a dating site to test a theory about victims of sexual predators. As Morgan slowly recovers, it becomes clear that Bennett was not the man she thought he was. First, his parents do not live where he claimed they did and what he shared about his life and occupation to Morgan were lies. What is even more disturbing is that Bennett was engaged to two other women and one of them was recently murdered. While Morgan works with Mackenzie, an animal advocacy lawyer, to try to save her remaining two dogs, she also tries to figure out Bennett's real identity.

The Hand That Feeds You starts out at a gallop with the gruesome murder and Morgan's breakdown. Then the action slows and there is a lot of information downloads presented in the story. The extra information on sociopaths, psychopaths and their victims is interesting. All the dog talk was interesting too (mainly because I have a soft spot for Great Pyrenees and adopting shelter dogs). Sometimes, oddly enough, the slower pace results in a laundry list of what Morgan decides to eat and drink. I know we all need to eat and drink, but there is such a thing as too much information. I can understand her picking up a bottle of water from a vendor and contemplating her next move, I don't really care if she was hungry, decided not to eat a hot dog, grabbed a bottle of water and gave the street vendor $2 for it and then he demanded $3.

This is a great airplane book. The opening is going to hook you and keep you reading. Even with all the extra information, I did want to keep reading to see who Bennett really was and if the dogs would be okay. Morgan isn't really an especially compelling protagonist and I didn't connect with her at all. The surprising twist at the end will likely not be a really big surprise to most readers, but it does provide a satisfying conclusion.


Disclosure: My Kindle edition was courtesy of Scribner for review purposes.