The Complete Works of Primo Levi

The Complete Works of Primo Levi 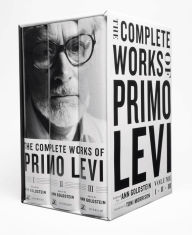 The Complete Works of Primo Levi  is a very highly recommended three volume set of the works of Primo Levy. Years in the making, this set represents a monumental endeavor and fitting tribute to Primo Levy. This is the definitive English translation collection.

Known to English-speaking readers mainly for his writings on the Holocaust, Primo Levy "did not want to be characterized only as a Holocaust writer, and the label does him a regrettable injustice, for he was also a prolific writer of stories, essays, novels, and poems, on a wide range of scientific, literary, and autobiographical subjects."

As the introduction from the editor says, "These new volumes, by presenting Levi in all his facets, will enable English-speaking readers to encounter for the first time the entire range of his versatile, inventive, curious, crystalline intelligence, will enable English-speaking readers to enrich their knowledge of Levi. In doing so, they will discover a writer they may not have known, one whom Italo Calvino called among 'the most important and gifted writers of our time.'" The volumes are arrange chronologically and contain many works that were hard to find or previously left untranslated into English. There are notes from the translators after many of the selections.

The three volumes include:

Disclosure: My Kindle edition was courtesy of Liveright Publishing for review purposes.
Posted by Lori L at 10:02 AM