Of G-Men and Eggheads

Of G-Men and Eggheads by John Rodden 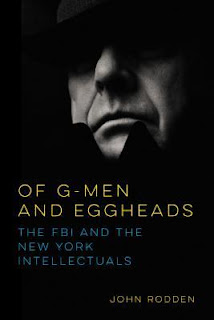 Of G-Men and Eggheads: The FBI and the New York Intellectuals by John Rodden is a recommended account of the FBI files kept on three men: Irving Howe, Dwight Macdonald, and Lionel Trilling.

"During the Cold War, dissent against U.S. international policy was looked upon as inherently suspicious. No one was more suspicious than outspoken left-leaning intellectuals, especially those who lived in Manhattan. For national security reasons, the federal government expended considerable resources surveilling men and women who might harbor communist sympathies and exert influence over others. In this book, John Rodden reveals how the FBI and CIA kept track of three highly regarded New York intellectuals--Lionel Trilling, Dwight Macdonald, and Irving Howe"

Three mid-20th century American intellectuals were investigated by and had extensive files kept on them by the FBI. It was under the assumption that they all presented some kind of security risk and anti-American sentiments. Although each of them were "critical Americans" in that they raised questions about policy or government activities, they did not warrant the scrutiny or the intense surveillance by the FBI. With all the current questions about FBI investigations, the NSA collecting data on and tracking Americans, and privacy concerns of average citizens, Of G-Men and Eggheads raises some important questions about how much surveillance we will allow to be conducted on citizens today. Where is the line of personal privacy versus public safety.

This is a well-researched presentation of the historical records. The text includes photos, notes, and an index.

I might have rated this higher if my review copy wasn't one that left out the letters "f, i, l, t." It makes it a struggle to smoothly read the text and, sometimes, decipher the words. Also, all dates were left out of my copy so I had to do my own research while reading the book. Two examples of what I had to wade through should make my struggles real to those who don't read advanced reading copies for review purposes:
"War of – (and again a er ) lay in Russia. e immigration of such Russian Jews into the United States o en raised"
and
"this seasoned veteran of internecine Le sectarian warfare would have proudly brandished his les of yesteryear"


Disclosure: My advanced reading copy was courtesy of the publisher/author.
Posted by Lori L at 9:41 PM