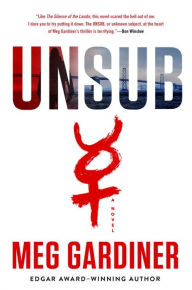 
UNSUB by Meg Gardiner is a very highly recommended psychological thriller/police procedural.
An UNSUB is what the FBI calls an unknown subject.  Between 1993 and 1998 anyone who lived in the Bay Area knew about the UNSUB called the Prophet. The Prophet terrorized the area and was responsible for eleven ritualistic murders, all unsolved. Caitlin Hendrix understands the terror and harm the Prophet caused because her father, Mack Hendrix, was the lead investigator on the case. The case nearly destroyed him while tearing her family apart.
Twenty years later Caitlin is a detective on the Narcotics Task Force. When two bodies are found bearing the signature of the Prophet, the sign for Mercury on their bodies, it appears that the Prophet is back, or a copycat, and the killings are going to begin again. Caitlin asks and is reassigned to Homicide where they are hopeful that she can convince her father to share some of his knowledge and insight about the previous cases. As the body count rises along with fear and tension, the Prophet leaves horrifying videos and cryptic written clues. Soon he begins to target Caitlin.
UNSUB feature extremely well-developed characters set in a fast paced, complex, riveting plot. Gardiner takes care to set the scene and establish her characters right away; then the action takes off and the tension steadily rises. Caitlin is a compelling, well rounded character and it will be exciting to see her return in another case. (And there will be a sequel, Into the Black Nowhere.) I'll be looking forward to the next case Caitlin is assigned.
Additionally, I was impressed with the skillful way Gardiner presented her complicated plot and the clues that needed to be deciphered in order to stop the murders and figure out who is the Prophet. The Prophet is intelligent and utterly evil, resulting in a gripping thriller with a terrifying killer. (The infamous Zodiac killer was the inspiration for the novel, so it is dark and disturbing.) But he is up against the intelligence and sheer determination of Caitlin, and she is a clever, serious adversary.
All in all, UNSUB is a perfect summer vacation thriller. This is definitely a stuck-over-night-at-the-airport book that will keep you awake and hold your complete attention - only you'll want to be in a well lite area, maybe near security.