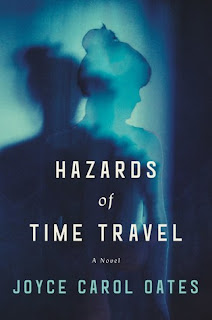 Hazards of Time Travel by Joyce Carol Oates is a recommended dystopian novel about a totalitarian regime where being sent back in time is a punishment.

Adriane Strohl is named valedictorian of her high school class, even after others tried to tell her that it is better to not stand out in the current political environment. When she practices her speech, which consists of questions, she is arrested, charged with Treason and Questioning of Authority, and punished by being sent to college. The college she is sent to is in Wainscotia, Wisconsin, and the time is in 1959, eighty years in the past. She is given a new name, Mary Ellen Enright, and has a chip implanted in her brain to ensure her cooperation and loss of past memories. The opening of the novel lists the rules and constraints Adriane is under for the time she is sentenced for rehabilitation. Obviously she should know that it could be dangerous when she becomes obsessed with and tries to talk to Dr. Ira Wolfman, a psychology professor. She is sure that he has also been sentenced to exile in 1959 Wainscotia.

Oates has created an interesting dystopian world, but, in my opinion, it certainly reads like a Young Adult novel and is not as well-imagined or well-developed as other adult dystopian novels out there. It falls a bit short of making the political statement that Oates' desires. Adriane's paranoia and struggle to try to remember who she was before feels realistic, as does her inability to fit into 1959. In many ways it feels like this novel was rushed to publication as a political statement. It might have had a chance to make a bigger impact if more time was spent making it a better, more complete statement. There is one part which occurs later in the novel that was startling and elevated the novel above the ordinary - a bit - which is the basis for my three stars. The conclusion is enigmatic, in relationship to the information the reader has about Adriane's punishment.
Disclosure: My review copy was courtesy of Harper Collins.
Posted by Lori L at 10:27 AM