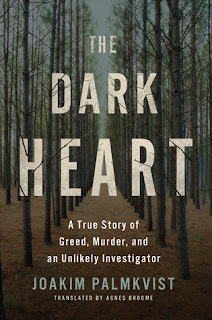 The Dark Heart: A True Story of Greed, Murder, and an Unlikely Investigator by Joakim Palmkvist is a highly recommended true crime story.

Late in the summer of 2012, Sara, the oldest daughter of  Göran Lundblad reported several days after the fact that her father was missing.  Göran was a millionaire landowner in Sweden and everyone who knew him found it highly unlikely that the man would just leave without a word to anyone or after his business affairs were all settled. The investigation and search lead to nothing even after there was a phone call to investigators implicating Sara's involvement from Göran’s youngest daughter Maria. She made it clear that Göran was not pleased with Sara and her boyfriend, Martin. He was sure Martin's interest in Sara was due to her family's wealth and a long-simmering dispute between the two families. Other people shared the same information. With no clear evidence the case went cold.

Then Therese Tang became involved. She is a driven, hard working woman and the mother of three, but more importantly she leads a branch of Sweden's Missing People, a group that assists in searching for anyone who is reported missing. Therese begins a search for Göran that eventually leads to a dangerous situation. Much of her success is due to the fact that she was able to discern that what was being said wasn't true through the body language, speech, and actions of Sara, but especially Martin. She put her own safety at risk to crack the case.


There is no real mystery to solve in this true crime story since it is obvious who did it from the beginning. What is interesting is the background information and the way in which the case was solved. While the actual book, which may suffer from some problems with the translation (I'm not a translator, but the book didn't flow quite right) would perhaps receive a recommended rating, I bumped it up to highly based on some of the interesting facts in the book, including those that compared and contrasted the legal system and law enforcement investigations between Sweden and the USA.

Disclosure: My review copy was courtesy of the publisher/author via Netgalley.