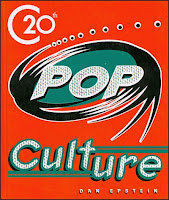 20th Century Pop Culture by Dan Epstein was originally published in 1999. My large hardcover copy has 256 pages. This is a visually appealing, fun book I found for a couple dollars in the clearance section of my local used book store. It is basically a look at the pop culture of the 20th century. There is less information on 1900-1944, which is simply listed as the early years rather than year by year like the rest of the book. This book isn't, however, the definitive record of pop culture in the 20th century. Epstein has a few factual errors that could have been caught with more careful editing ( for example saying "George" instead of "Michael" Dukakis on pg. 209). Even worse than this is the fact that he really interjects his opinion way too much, especially from the 70's on. You really do need to overlook his obvious personal bias once you reach more recent years. Those of us who remember the years covered will also remember many different aspects of pop culture that Epstein left out. No rating
Quotes:

"...1945 saw Percy LaBaron Spencer invent the microwave oven, but at three thousand dollars a pop, the Ratheon Company's new 'Raydarange' was priced far out of the reach of most consumers." pg. 14

1952 "...on March 21, the country's first official 'panty raid' took place at the University of Michigan, as six hundred male students stormed a women's dormitory with the intention of stealing and undergarments they could find." pg. 42

1959 " 'Phone-booth packing,' the art of seeing how many people you can fit into a phone booth, briefly became the rage on college campuses." pg 79

1961 "In a speech to the National Association of Broadcasting, Minow called TV a 'vast wasteland,' remarking that 'I do not think the public taste is as low as some of you appear to believe.' Minow's pronouncement was proven wrong when Mr. Ed, a situation comedy about an architect who discovers a talking horse... became an immediate hit." pg. 86

1963 "The TV spot for Hawaiian Punch fruit drink was another popular animated advertisement. 'How'd you like a nice Hawaiian punch?' asked a character known as 'Punchy;' when his hapless companion answered in the affirmative, Punchy hauled off and socked him. Life imitated art as the scene was repeatedly replayed in schoolyards across America." pg. 95 (I can remember saying this.)

1969 "...consumers apparently found the idea of a specially brewed mixture of beer and Gatorade [Hop 'N' Gator] to be extremely off-putting. After a few months, the product vanished from the market..." pg. 121

1973 "There were endless lines at gas stations, thanks to the OPEC oil embargo, and nationwide meat boycotts resulting from the inflated hamburger prices." pg. 138

1975 "[Kung Fu]....was also famous for its atmospheric flashback sequences during which the young 'Grasshopper' Caine pondered the pearls of wisdom at the knee of the blind master Po." pg. 148 (Kung Fu was actually on from 1972-75)

1980 "...Carter authorized a federal bailout for the floundering Chrysler Corporation to the tune of fifteen hundred million dollars in federal loan guarantees." pg. 170

1987 "Along with the 1988 sex scandal involving televangelist (and Bakker rival) Jimmy Swaggart, the PTL affair went a long way towards diminishing the power of the religious right in America." pg. 198 (oh really?)