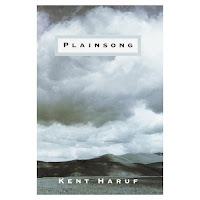 Plainsong by Kent Haruf was originally published in 1999. My hardcover copy has 301 pages. Each chapter of Plainsong follows a different character and the chapter title tells you who it is about. The chapters alternate between the characters of Guthrie, Ike and Bobby, Victoria Roubideaux, and the McPherons. I found this very effective, especially since the novel is character driven. Guthrie is a high school teacher whose wife is having a nervous breakdown. Ike and Bobby are his two sons. Victoria is a pregnant teenage girl. The McPherons are bachelor brothers who live on a ranch. Plainsong follows these characters and their intertwined lives with other people, like teacher Maggie Jones, in the small town of Holt, Colorado. While the story can be heart warming, it is also heart breaking and very realistic. Haruf also eschews the use of quotation marks, which should be mention for those who like proper punctuation. Rating: 4.5

A heartstrong story of family and romance, tribulation and tenacity, set on the High Plains east of Denver.

In the small town of Holt, Colorado, a high school teacher is confronted with raising his two boys alone after their mother retreats first to the bedroom, then altogether. A teenage girl -- her father long since disappeared, her mother unwilling to have her in the house -- is pregnant, alone herself, with nowhere to go. And out in the country, two brothers, elderly bachelors, work the family homestead, the only world they've ever known.

From these unsettled lives emerges a vision of life, and of the town and landscape that bind them together -- their fates somehow overcoming the powerful circumstances of place and station, their confusion, curiosity, dignity and humor intact and resonant. As the milieu widens to embrace fully four generations, Kent Haruf displays an emotional and aesthetic authority to rival the past masters of a classic American tradition.

Utterly true to the rhythms and patterns of life, Plainsong is a novel to care about, believe in, and learn from.

"Here was this man Tom Guthrie in Holt standing at the back window in the kitchen of his house smoking cigarettes and looking out over the back lot where the sun was just coming up." first sentence

"As soon as he was gone she turned in the bed and looked toward the door. Her eyes were intense, wide-awake, outsized. pg. 6-7

"Even before she was awake she felt it rising in her chest and throat." pg. 8

"When they arrived at the playground they separated to join their own friends and stood talking with the other boys in their own grades until the first bell rang and called them into class." pg. 16

"The girl stood over the sink working in the hot soapy water, her hands in rubber gloves. She began to scour the pots left over from the lunch trade. She came in every weekday after school and washed the pots the morning cook had used and also the plates and cups and silverware and platters from the noon hour." pg. 26

"Then how come she doesn't come downstairs? Bobby asked.
Maybe she already did. Maybe she went back up." pg. 28

"I thought your mother moved out. I heard she moved into that little house over on Chicago Street.
They didn't answer. They were not surprised that he knew. But they didn't want him talking about it in his barbershop on Main Street on Saturday morning." pg. 40

"Afterward, when she was calm again, after the doctor had left, she went into the air outside the Holt County Clinic next to the hospital, and the light in the street seemed sharp to her and hard edged, definite, as if it were no longer merely a late fall afternoon in the hour before dusk, but instead as if it were the first moment of noon in the exact meridian of summer and she was standing precisely under the full illumination of the sun. Pg. 78