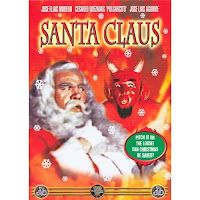 Santa Claus is a 1959 movie starring Cesareo Quezadas and Jose Elias Moreno. It was made in Mexico.
This movie has become a (bad) Christmas tradition at our house. We first saw it on a late night horror movie show that featured a host who made fun of the movies. His show was bad. The movies featured were bad. But this movie.... this movie is a diamond in the rough, very rough. It became an immediate favorite to watch and laugh hysterically over every Christmas. Oh how we love to make fun of it! (Even with all the hilarious parts, actually the full version has a good Christmas message.)

Make plenty of popcorn (Orville Redenbacher's SmartPop!) for everyone and let's look at some special parts of this little gem:

Santa Claus features a horrible politically incorrect section of stereotypes of different children from around the world, singing in a trance-like state. Santa's helpers seem to be the children, so he was the first one to use children as slave labor. Santa also has Merlin the wizard and a very special, manly blacksmith to help him prepare. His sleigh is powered by creepy looking reindeer. Santa lives in a castle in the clouds where he plays bad music and spies on children around the world using a special machine that features a huge ear, lips, and an eye on various parts of it.

But the main focus of the movie is that satan has sent his devil Pitch to make trouble for Santa.... yes, Santa vs Satan. Pitch focuses his energy on three wicked brothers, one sad, rich boy, and a poor little girl named Lupita who is desperate to get a doll for Christmas.

While this movie could easily give young children nightmares, older teens will delight in the maniacal, inappropriate laughter by Santa. They will roll on the floor laughing over Santa spying on kids, drugging parents, s-l-o-w-l-y climbing the ladder up to his sleigh, his freaky, hairy blacksmith, the dancing scene in hell, the dancing dolls that come out of coffins (poor little Lupita!), Merlin the wizard, the wind-up reindeer that will turn to dust if the sunlight hits them, and Santa's trials delivering presents to, what, maybe 4 houses in Mexico City. It's one bad movie!


Now it's your turn! Share your favorite Christmas movies!
My Friend Amy is having a contest that offers four readers a month's supply of Orville Redenbacher's SmartPop! popcorn and a popcorn bowl to go with it!
The contest will run one week

Never heard of it, but thanks for sharing. I do a lot of late night work during the holidays. Maybe, I'll catch it! :)

I"ve never seen this, but I do think I've heard of it!