A Heartbreaking Work of Staggering Genius 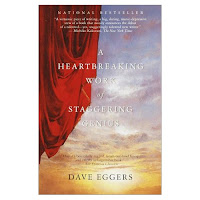 A Heartbreaking Work of Staggering Genius by Dave Eggers was originally published in 2000. I'm just going to call the number of pages read 500 pages. This is estimated because there is over 38 pages of preface, acknowledgements and notes, the book, and another 48 pages on "mistakes we knew we were making." While A Heartbreaking Work of Staggering Genius is partly Dave Eggers' memoir of bringing up his younger brother after his parent's death from cancer, it also has parts that are Gen-X stream-of-consciousness writing. Eggers' account does have touching moments of great clarity, but these are interspersed with rather uncontrolled bouts of self reflection. Before you can fault Eggers for his solipsism you may recall that he has already told us in the preface that the book was uneven in places, maybe not all that interesting throughout, and self-obsessed. I'm rating this a 3.5 for me, fulling understanding that others are going to rate it a 5 or a 1, that I would have rated it a five with some editing, and that I am not and never was Eggers' target audience.

Dave Eggers is a terrifically talented writer; don't hold his cleverness against him. What to make of a book called A Heartbreaking Work of Staggering Genius: Based on a True Story? For starters, there's a good bit of staggering genius before you even get to the true story, including a preface, a list of "Rules and Suggestions for Enjoyment of This Book," and a 20-page acknowledgements section complete with special mail-in offer, flow chart of the book's themes, and a lovely pen-and-ink drawing of a stapler (helpfully labeled "Here is a drawing of a stapler:").
But on to the true story. At the age of 22, Eggers became both an orphan and a "single mother" when his parents died within five months of one another of unrelated cancers. In the ensuing sibling division of labor, Dave is appointed unofficial guardian of his 8-year-old brother, Christopher. The two live together in semi-squalor, decaying food and sports equipment scattered about, while Eggers worries obsessively about child-welfare authorities, molesting babysitters, and his own health. His child-rearing strategy swings between making his brother's upbringing manically fun and performing bizarre developmental experiments on him. (Case in point: his idea of suitable bedtime reading is John Hersey's Hiroshima.)
The book is also, perhaps less successfully, about being young and hip and out to conquer the world (in an ironic, media-savvy, Gen-X way, naturally). In the early '90s, Eggers was one of the founders of the very funny Might Magazine, and he spends a fair amount of time here on Might, the hipster culture of San Francisco's South Park, and his own efforts to get on to MTV's Real World. This sort of thing doesn't age very well--but then, Eggers knows that. There's no criticism you can come up with that he hasn't put into A.H.W.O.S.G. already. "The book thereafter is kind of uneven," he tells us regarding the contents after page 109, and while that's true, it's still uneven in a way that is funny and heartfelt and interesting.
All this self-consciousness could have become unbearably arch. It's a testament to Eggers's skill as a writer--and to the heartbreaking particulars of his story--that it doesn't. Currently the editor of the footnote-and-marginalia-intensive journal McSweeney's (the last issue featured an entire story by David Foster Wallace printed tinily on its spine), Eggers comes from the most media-saturated generation in history--so much so that he can't feel an emotion without the sense that it's already been felt for him. What may seem like postmodern noodling is really just Eggers writing about pain in the only honest way available to him. Oddly enough, the effect is one of complete sincerity, and--especially in its concluding pages--this memoir as metafiction is affecting beyond all rational explanation. --Mary Park

"For all the author's bluster elsewhere, this is not, actually, a work of pure nonfiction. Many parts have been fictionalized in varying degrees, for various purposes." preface opening

"Further, this edition reflects the omission of a number of sentences, paragraphs, and passages.
Among them:...[to page xvii] pg. xi

"My mother is on the couch. At this point she does not move from the couch." pg. 2

"But the family room, the only room where any of us has ever spent any time, has always been, for better or worse, the ultimate reflection of our true inclinations. It's always been jumbled, the furniture competing, with clenched teeth and sharp elbows, for the honor of the Most Wrong-looking Object." pg. 6

"I did not know that the last time I saw my father would be the last time I would see my father. He was in intensive care. I had come up from college to visit, but because it had been so soon after his diagnosis, I didn't make much of it." pg. 35

"The enemies list is growing quickly, unabated. All these people impeding us, trifling with us, not knowing or caring who we are, what has happened." pg. 71

"We scrape through every day blindly. always getting stumped on something we should know - how to plunge a toilet, how to boil corn, his Social Security number, the date of our father's birthday - such that every day that he gets to school, that I get to work and back in time for dinner, each day that we cook and eat before nine and he goes to bed before eleven and doesn't have blue malnourished-looking rings around his eyes like he did for all those months last year - we never figured out why - feels like we've pulled off some fantastic trick - and escape from a burning station wagon, the hiding of the Statue of Liberty." pg. 82

"I am emboldened by youth, unfettered and hopeful, though inextricably tied to the past and future by my beautiful brother, who is part of both. Can you not see that we are extraordinary?That we were meant for something else, something more? All of this did not happened to us for naught, I can assure you - there is no logic to that, there is logic only in assuming that we suffered for a reason. Just give us our due." pg. 236

You can see it here:
http://janedoesntblog.blogspot.com/2009/01/lemonade-award.html
I had never received a blog award, so I found it so much fun giving it out!

I like this lemonade award, but I think maybe we should make a SAKI award. LOL

I have always wanted to read this book. After reading your review, I am not so sure. I have little tolerance for self obsessed ramblings... uh... except for my own of course. Thanks for the award!

This is my absolute favourite book of all time.