It was King Kong marathon night. 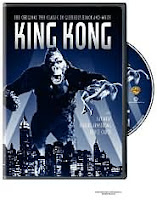 The 1933 movie is still strong and the stop-motion animation remains impressive. I could argue that this version would be my favorite of the three.
The 1976 version is probably best avoided. First it doesn't follow the original storyline. It's the 70's and due to the oil crisis, they are looking for oil on Skull Island. The island natives were an embarrassment. In 1933 you expect some stereotypes and politically incorrect scenes, but in the 70's... This was one bad movie. When the audience members here all pulled out books to read while it was on, we decided to skip through several scenes. The ending climatic scene is played out on the twin towers, which is sort of poignant to watch now but might be more so if the movie was any good. In the end, though, all we wanted was the ape, Jessica Lange and Jeff Bridges to all die.
The 2005 had a nice approach - remaking the 1933 original King Kong and keeping it set in that time period. The natives this time were creepy and sort of zombie-like, but probably the best of the three. There are many more (long and drawn out) battles with creatures in this version. The final scene on the Empire State building is also too long and drawn out. Anne Darrow (Fay Wray 1933, Naomi Watts 2005) is still actually played better by Fay Wray. Naomi Watts (or Jackson's direction of her) is too in love with Kong. We all get the ape loves her, but he's a huge ape... she shouldn't be feeling the same way. We decided that this could be a case of Stockholm Syndrome and that also, subconsciously, she felt she was sacrificing herself to save the people of NYC.
Posted by Lori L at 10:56 AM