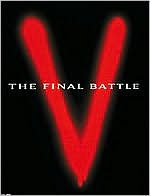 
V , the miniseries, was originally aired in 1983 on NBC.
V: The Final Battle aired on NBC in 1984 and provided a conclusion to the 1983 miniseries.
The basic story is, for those of you who are unfamiliar with V is that a race of alien Visitors, seemingly human-like, arrive on Earth and promise friendship, until they try to take over the planet. A rag-tag group of people form a resistance movement.
All Movie Guide says that V was "inspired by Sinclair Lewis' It Can't Happen Here, a 1935 account of a fictional fascist takeover of America." "V was written and directed by Kenneth Johnson, who initially envisioned the project as a less fanciful story of fascist aggression; when his pitch to NBC seemed to be faltering, Johnson allegedly added the alien angle extemporaneously, securing himself a green light and NBC a sweeps-week hit."

These shows have really stood the test of time. There are some little indicators here and there that show you it was made in the 80's, and the movie doesn't stay completely true to the miniseries in all the minor details (some professions of characters were changed), but, all in all, it really continues to be a solid movie. (It should be mentioned that the success of V also spawned a short lived TV series that was not as good as these two miniseries movies.)
Very highly recommended