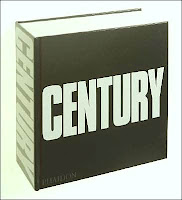 A visual history of the 20th century, the photographs in this volume cover events which range from the hard history of politics to new inventions, the arts, society and fashion. The images have been drawn from international agencies such as Life, Magnum, Picture Post and Stern. The book is divided into six chronological sections corresponding to significant historical moments. Each section opens with a short historical overview which introduces the main concerns during the period covered. There is also a selection of quotations which capture the flavor of the period covered. There are extended captions at the end of each section providing historical information about each photograph.

The photographs in Century are divided into six sections: 1899-1914, High Hopes and Recklessness; 1914-33, Self-Inflicted Wounds Remain Infected; 1933-45, Rise and Fall of the Unspeakable; 1945-65, Atomic Truce Walks a Tightrope; 1965-85, Vietnam to the Moon to Soviet Collapse; and 1985-99, Chaos and Hope on a Burdened Planet. At the beginning of each section you will find quotes from various people or literature from that time period. Following each section is some text about the pictures. This is a huge coffee table book of photographs that my daughter, Just Me, purchased used.

It has been noted by a reviewer on Amazon that "the picture on page 421 that purports to be of Nazis executing people somewhere in the Baltic in 1942 is actually a picture of Nazi war criminals being executed in Poland in 1946." I don't know if this is true. I did notice some editorializing on the captions. For example on page 39 a picture of a Texas oil well gushing is additionally captioned "It would soon fuel universal human mobility - and create enormous wealth as well as pollution." This is the exception, however, and not the rule. (And perhaps not the most blatant example of editorial prejudice in the book, but the first one I could quickly find for an example.)

Additionally, when viewed all at once over a short period of time, Century can be very overwhelming and depressing. Almost all of the historical pictures are of the dark side of human nature, suffering, wars, and death, and were chosen with a purpose in mind. As Bernard wrote in the preface: "I hope that this book aided strongly by its historical background information will provide both nourishment for thought and a stimulus for the imagination, and that it will encourage younger people to despise as well as hate and fear war and violence and any kind of exploitation or persecution of man or woman by woman or man." (pg. 7)

Very Highly Recommended - for adults only, this is not a book for children or the whole family.
Posted by Lori L at 8:33 PM