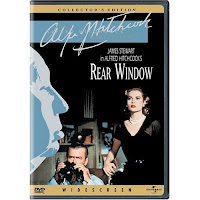 This weeks Summer of Hitchcock movie at MyFriendAmysBlog.


Rear Window is brilliant. The casting and dialogue are impeccable. Limiting the set to the apartment courtyard and keeping the camera angle always from Jeffries room (with only a couple of exceptions at the end) is masterful. It really gives you the feeling you are Jeffries, the bored photographer with a broken leg who is stuck in his claustrophobic apartment and becomes a voyeur, watching the secret, private world of neighbors for entertainment. And it begs the question, what do we really know about our neighbors. Even though it is a murder mystery too, we never see anything gruesome, just clues that point to what might have happened. After watching it numerous times, the climax of Rear Window continues to be suspenseful. The timing was perfect.

When, at college orientation they asked the students what was their favorite movie lots of them answered some inane recently released movie that is already basically forgotten. Wonder Boy answered Rear Window and unfortunately received a bunch of weird, confused looks.
Posted by Lori L at 1:42 PM

I really enjoyed Rear Window. I can't believe I waited so long to see it.

Great review. Though I've seen the film countless times the ending is still suspenseful to me.

Rear Window continues to be one of my favorite movies!