Guest Post: Things Your Dog Doesn't Want You to Know


My Question to Hy Conrad and Jeff Johnson, authors of Things Your Dog Doesn't Want You to Know: Eleven Courageous Canines Tell All:

Not to start a breed war or anything, but do you have a favorite breed of dog? 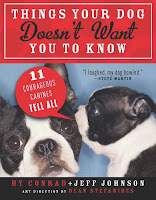 People ask us all the time if we have a favorite breed of dog.  We have many.

And that’s why we included stories from 11 different dogs in our book – representing 11 different breeds.  From the hard-working German Shepherd to the bossy Border Collie.

Part of the fun of writing a humor book about dogs is the ability to play with the various breed-related stereotypes.  Chihuahuas, people tell us, are fussy and yappy and sometimes live in a purse.  Yellow Labs, other people tell us, are fun-loving but have a hard time figuring out complex realities like elevators.

We do have, we must admit, a special affinity for Miniature Schnauzers, having owned them for over 25 years.  I imagine many people are like us in this respect.  One gets used to a certain look and personality and that becomes your breed.  Whether real, or simply imagined by their owners, different breeds have distinctly different characteristics.

The art director of the book (Dean Stefanides) approaches the breed issue quite differently.  Rather than sticking to one breed at a time, Dean has several.  Right now, Dean owns 2 Greyhounds, a Rottweiler, an Irish Wolfhound mix, a Pointer, a Cocker Spaniel and a Mini-Pincher.  (All living with Dean and his wife in a New York City apartment).

Writing “Things Your Dog Doesn’t Want You to Know” was great fun, but when it came to creating the cover, well, that was a challenge.

We went through dozens of different designs before settling on the one everyone loved -- a Boston Terrier puppy sharing a secret with its mom.  This was especially meaningful to Hy, since his first dog as a kid was a Boston Terrier.

After much deliberation, Hy and his sister named him Buster Brown after the shoes, which featured a boy named Buster and his dog Tighe.  It wasn’t until later that they realized that Tighe was a pit bull puppy, not a Boston.  In hindsight, it really didn’t matter, since they had actually (and inadvertently) named the dog after the boy and not his dog, anyway.

You can get a good sense of the book and all 11 different breeds by going to our website, www.ThingsYourDog.com, where you can also post your own questions about dog behavior and one of our eleven dogs will answer it for you (humorously, we hope).

Here is one of our 115 stories, this one by our Miniature Schnauzer, Charlie.  Charlie lives in a foster home with six other dogs.  And in this story, he explains the rules of dog-walking to their newly hired dog-walker.

“NOTE TO THE DOG-WALKER”
By Charlie, the Miniature Schnauzer

We were very excited when you first showed up. To tell the truth, days do get a little long. And even though we have dog doors and doghouses and a whole big backyard, everyone can use an afternoon walk. We're just sorry that things got off to a rocky start. Maybe if I give you a few pointers...

First off, you can't walk all seven of us together. I think you learned that lesson. But it's also very important who you take with whom and when and where. It's simple.

Chloe has to be first, since she hates us and won't pee if we've been out there before her. But you can't walk her alone because that would upset Snowball, who gets jealous. I would recommend walking the girls together but keeping them twenty or thirty feet apart for safety. Except, of course, if it's swel­tering hot (Snowball faints easily) or if one of them has a urinary tract infection. Then you should leave Snowball behind and walk Chloe with a male of a similar temper, usually me or Jake unless we're not in the mood to deal with Chloe.

Duke must be in the second group, or else he'll fall behind and bite at your heels. No one knows why. Jake can be in this group too, unless he's with Chloe in the first group. And Buster has to be with Jake, unless there are more than three dogs in this group, which I wouldn't recommend.

During the winter, Miley can be in group three, except if there's snow. Then she goes in a special group four, with snow booties. Duke is also in the snow booties group, although you have to make sure you have the right size, since he's old and his feet swell. But don't try booties on Buster. Buster's paranoid about his feet.

Group three also has the dogs who like to run. That can be me or Jake or Buster if we're not in a previous group. If Miley is here, then you have to carry her for part of the run since she's not much into exercise.

If rain is involved, you need to do exactly the opposite of the above advice. This is essential. Sleet rules are the same as snow rules plus rain rules but minus the booties rule. Very cold weather means jackets, but only for the girls, unless there's wind. Then everyone gets a jacket, except Buster, who still thinks you're too close to his feet. I hope this explains it.

I couldn't help but notice that you haven't been around for a few days. I assume this is just because of your injuries and has noth­ing to do with anything we might have accidentally said or done. Please hurry back.
Posted by Lori L at 6:30 AM

Thanks so much for taking part in the tour!

Interesting how the cover came about.