Sixteen-year-old Sulan Hom can’t remember life before the Default—the day the United States government declared bankruptcy. As a math prodigy, she leads a protected life, kept safe from the hunger and crime plaguing the streets of America. She attends the corporate-sponsored Virtual High School, an academy in Vex (Virtual Experience) for gifted children.
Beyond the security of Sulan’s high-tech world, the Anti-American League wages a guerrilla war against the United States. Their leader, Imugi, is dedicated to undermining the nation’s reconstruction attempts. He attacks anything considered a national resource, including corporations, food storage facilities—and schools. When Sulan witnesses the public execution of a teenage student and the bombing of a college dorm, she panics.
Her mother, a retired mercenary, refuses to teach her how to defend herself. Sulan takes matters into her own hands. With the help of her hacker best friend, Hank, Sulan acquires Touch—an illegal Vex technology that allows her to share the physical experience of her avatar. With Touch, Sulan defies her mother and trains herself to fight.
When Imugi unleashes a new attack on the United States, Sulan finds herself caught in his net. Will her Vex training be enough to help her survive and escape?

Sulan, Episode 1: the League by Camille Picott is the first book in a new YA dystopian/cyberpunk/dystopunk series. It follows sixteen year old Sulan Hom and her friends. While Sulan is sheltered and protected to some extent, there is still the real possibility that the Anti-American League will attack. Sulan and her friends use "virtual experience" or Vex to attend a corporate sponsored high school for gifted children and to interact with each other socially. In fact, a large part of the action occurs in Vex.

Sulan, who is the narrator, really feels like a teen in this series. Like most teens, she resents her mother's expectations for her future and thinks she should be able to make her own decisions. While gifted in mathematics like her famous father, she really wants to learn to fight like her mother, a former mercenary. Her mother refuses to teach her to fight - so Sulan finds a way to learn using Vex.

Since this is just the first book in a forthcoming series there are questions left unanswered; and even though Picott has a great start on her world building, there is more information needed to fill in gaps. The great news is that it is a fast paced novel. Sulan is extremely entertaining with an exceptionally captivating storyline. I'll admit I was immersed in Sulan's world and upset when this first novel ended. I wish I had the second novel around because I would have started it immediately.

I suppose the big question is: How does Sulan compare to The Hunger Games? I think it's a favorable comparison. Certainly YA fans of The Hunger Games will likely enjoy Sulan. While I felt there was less violence in Sulan, there is some. 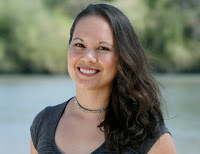 Camille Picott has been writing books since the age of twelve. She specializes in science fiction and fantasy stories with Asian-inspired settings and Asian main characters. She is the author of two middle grade fantasy books, Raggedy Chan and Nine-Tail Fox.
In her spare time, Camille loves to read books and write reviews. Her reviews are written from a writer’s perspective, highlighting various aspects of craft found in the books she reads.

Disclosure: I received an advanced reading copy of this book from the author and Premier Virtual Author Book Tours for review purposes.

“Mom!” I throw open my bedroom door and race down the hallway of our San Francisco apartment. Riska, my genetically engineered pet, flicks my cheek with a leathery black wing as he streaks past my head. “Mom!” I burst into the living room, waving a computer tablet in one hand. Riska growls in response to my agitation, hovering in the middle of the room.
“What is it, Sulan?” Mom looks up from the couch, where she folds laundry. Her elegantly slanted eyes widen at the panic in my voice. She wears her customary black pants and tank top. The light creeping through the bulletproof window shutters illuminates the scars that crisscross her arms.
“A bomb was just detonated at Stanford University. Look.” I shove the tablet into her hands, pausing only to turn up the volume. Riska alights on my shoulder, still growling. I rest one hand on his black-and-white-striped fur, leaning over the tablet with Mom. The screen displays a female news reporter in front of a collapsed building, black smoke billowing behind her. Yellow-gold media drones zip through the disaster area, capturing footage. The flying disks blink with red and blue lights.
“I’m reporting live from Stanford University in Stanford, California,” says the reporter. “Thirty minutes ago, a bomb was detonated in a resident dorm. Initial reports confirm that over five hundred students live in this building.” opening

Scattered among the Global mercs are a dozen other mercs in light blue, the United States flag embroidered on the right breast of their uniforms. The government usually finds a handful of soldiers to spare for occasions like this, though it’s just for show. Ever since the Default—the day our country declared bankruptcy—people have looked to corporations like Global Arms for protection and security. Location 69-72

Imugi’s face is concealed by his signature shiny white SmartPlastic mask, its only adornment a blue sea serpent that twines up his right cheek and across his forehead. As the leader of the Anti-American League, a Pacific Rim terrorist organization, he always makes an appearance after a strike. Location 80-82

Mom ignores this. “You also have Riska.” We both glance at my furry, winged miniature tiger—also known as a Risk Alleviator, a biological personal security device. A gift made by Dad for my sixteenth birthday. Riska returns to his perch on my shoulder, fur fluffed along his spine and tail; Dad designed him to pick up my emotions. And to defend me, should I need defending. Location 111-115

“It’s too dangerous,” I say, mimicking Mom’s words in a high-pitched voice. “Leave the fighting to others, Sulan. Concentrate on your schoolwork.” How am I supposed to concentrate on anything when I’m worried about getting blown up or shot in the head? Whatever. I don’t need her. I’ll figure this out on my own, and she can’t stop me. I am not going to get cornered like those kids at Stanford.  Location 135-139


Some refugees are victims of the Default, but others are victims of the Shift—the permanent climate change that turned most of Middle America into a baking wasteland. With Global patrolling the I-580 Corridor and San Francisco, this is one of the most popular areas for refugees; there’s relative safety on our streets. Location 162-164

“State your first and last name,” says the androgynous voice of Global’s firewall.
“Sulan Hom.”
“Retinal authentication commencing.” The Vex set projects a thin beam of blue light into the left goggle and scans my eye. I am careful not to blink. “Retina verified,” it says. “Welcome to Global Arms Virtual High School.” Location 184-188

I’ve heard Mom and Dad talk about the Default. In a single day, thousands of pink slips were issued to public employees. Schools and colleges across the nation closed. Social and public service programs ground to a halt. Courthouses locked their doors. Bad checks were issued to military personnel, which led to a mass exodus of soldiers and the founding of some of the earliest mercenary companies. Location 322-325

Thanks for taking part in the tour. I'm so glad you enjoyed Sulan!

Thanks so much for participating in the tour and taking the time to read Sulan! I really appreciate it!