Description:
The Whipping Club explores the sacrificial secrets we keep to protect our loved ones and the impact that uncovered secrets have on marriage, family and society. Both a wrenching family drama and a harrowing suspense story, it chronicles an interfaith couple's attempt in 1960's Ireland to save their son from corrupt institutions.

The Whipping Club by Deborah Henry follows Ben and Marian, a mixed couple of Jewish and Catholic backgrounds, their daughter Johanna, and their son, Adrian, who Marian gave up for adoption ten years earlier. Set in Ireland, the first chapter opens in 1957, but the novel is primarily set ten years later, 1967 and on. Finding herself pregnant before they married, Marian gives up Adrian, the couples first child, after staying in a Catholic home for unwed mothers. She and Ben marry later, and have their daughter, Johanna, but Marian is rife with guilt over giving up their son. Then she learns that Adrian was never adopted but was, instead, given over to an orphanage.
Marian tells Ben her secret, discovering that he already knew it, and the couple set out to find and then add their son back into their family. This struggle then illuminates the injustice and abuse orphans and unwanted children suffered at the hands of the Catholic run system in Ireland. At the same time their daughter Johanna is also facing religious intolerance based on her parentage.
The Whipping Club is a melancholy, bleak page turner. We experience Marian's (unnamed) depression, the brutality in the orphanages, the uncertainty that there is a satisfactory conclusion to the myriad of hopeless situations present. Henry is an adept writer and she does a good job with character development, even when several major characters were not very appealing. The story did keep my interest right up to the end. The description of the brutal treatment of the children at the orphanage is horrific.
I did have a few qualms about the novel. First, while The Whipping Club is well written, the actual dialogue didn't fully convey the emotional upheavals the characters are experiencing. My biggest hesitation about the novel was that, as I was reading, the first part of the novel seemingly was heading one way and then diverged to another direction. While this could be describing an intriguing plot development shift, unfortunately in this case it feels more like the intent became obscured by a switch of focus and some clarity of purpose was lost.
Perhaps my reservations about the novel could be answered by integrating all the characters right from the beginning and weaving their stories together toward a final conclusion. That might have required rewriting the entire novel, a daunting prospect for a novel that really is not badly written to begin with.
So, in the end, I enjoyed reading The Whipping Club but I am feeling a dichotomy over rating it.  It is a very well written novel and I've been known to rate based on writing ability. I've also been known to rate based on exciting plots in spite of the writing. Here we have skillful writing but the main storyline of the novel felt like it loss it's original focus and changed direction to a different focus - but different isn't always bad.
I've decided to Highly Recommended The Whipping Club, for a first novel, and watch for promising future novels by Henry.
Disclosure: I received an advanced reading copy of this book from the author and TLC for review purposes.

Quotes:
Marian spent the morning in Dr. O'Connell's office. opening
"I know this sounds rosy, but let me tell you, he'll resent you. And he'll resent the baby, as well. Further, whatever love's between you will be lost."
She could feel the drumming of blood in her chest.
"Because sometimes love is not enough, Marian. That's the truth."
"You don't know us, Father."
"Ah! But I do, Marian. I've seen it over and over. You think this baby will bind you together, but it won't. It'll burden you. I don't want to scare you, Marian, but I want you to fully understand your predicament." pg. 11
But where are you going?"
"It's a rest I'm going for. A lovely rest."
She laid her head on his shoulder. She would do the right thing, she thought. She'd not force him into it; she'd not rush him." pg. 24
"Da, today my teacher asked me if I was Jewish."
Ben looked at Marian. They had prepared their answer long ago. "I'm Jewish. Ma is Catholic. And people say you are what your mother is, so you're Catholic. Technically. If someone asks. But really you're a blend of me and your ma." pg. 31
She'd been a bad girl with unbridled thoughts and actions. She had not been able to control her desires and now she was paying. They would all pay, and she felt real fear course through her body. Had she really thought she could keep her secret forever? pg. 39
Whatever it was that Nurse thought was important, it wasn't worth allowing he past to spread like syphilis onto Johanna and Ben. Nurse could never come back. Sister Paulinas shall never come back. None of them from the underworld would corrupt her and her family now. Marian felt an inescapable heat rising in her stomach. There would be punishing repercussions for Nurse, she must know that, if anyone were to find out that she'd paid them a visit. pg. 41
Welcome to the Whipping Club." pg. 213 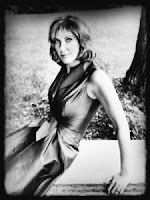 Deborah Henry attended American College in Paris and graduated cum laude from Boston University with a minor in French language and literature. She received her MFA at Fairfield University. She is an active member of The Academy of American Poets, a Board member of Cavankerry Press and a patron of the Irish Arts Center in New York.
Curious about the duality of her own Jewish/Irish heritage, Henry was inspired to examine the territory of interfaith marriage and in so doing was led to the subject of the Irish Industrial School system.
The Whipping Club is her first novel. She lives in Fairfield, Connecticut with her husband and their three children. She is currently at work on her next book.

The Whipping Club was an emotional read for me...but closer to the end was where it really grabbed me. I was sobbing by the time I finished. Enjoyed your review :)

I can certainly understand the dichotomy you mention but I'm glad that you are able to recommend this book.