Hello From the Gillespies by Monica McInerney 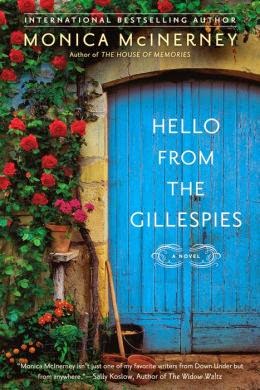 For the past thirty-three years, Angela Gillespie has sent to friends and family around the world an end-of-the-year letter titled “Hello from the Gillespies.” It’s always been cheery and full of good news. This year, Angela surprises herself—she tells the truth....
The Gillespies are far from the perfect family that Angela has made them out to be. Her husband is coping badly with retirement. Her thirty-two-year-old twins are having career meltdowns. Her third daughter, badly in debt, can’t stop crying. And her ten-year-old son spends more time talking to his imaginary friend than to real ones.
Without Angela, the family would fall apart. But when Angela is taken away from them in a most unexpected manner, the Gillespies pull together—and pull themselves together—in wonderfully surprising ways….

Hello From the Gillespies by Monica McInerney is a highly recommended novel about a family that isn't perfect. After the annual Christmas letter reveals their secrets and then a greater tragedy happens they are forced to deal with reality and each other.

We've probaby all received those Christmas letters from some families that are full of unnatural cheer and bragging. Wouldn't it be nice to for once receive a letter that tells it like it is, all the unvarnished truth as well as some speculation about what may really be going on. Angela Gillespie, frustrated while trying to write her annual cheerful Christmas letter, decided to take it as a cathartic writing challenge to write down exactly what she thinks about what her children are really doing, how her husband is acting and how their marriage may be in trouble, and her fantasy about how her life should have been.  After Angela unloads all her angst in the letter, which she has no intention of sending, an emergency has her leaving it as is, not deleted, and her husband, thinking he is doing her a favor, sends it off to the 100 people on their Christmas email list.

Now, along with her distant husband, her grown daughters are upset (and all moving home) and her 10 year-old son is discussing it all with his imaginary friend. They all have to decide how they are going to handle the fact that everyone knows the unvarnished truth. Later, when a real emergency happens, they all need to pull together. The first half of the novel deals with the infamous Christmas letter and the aftermath, while the second half of the novel really focuses on the family and their unity. It must be said that even though the older daughters are supposedly 32, they come across as much younger and it can be a struggle to deal with their immaturity, along with their sister's whining.

Even with a predictable ending, Hello From the Gillespies is the kind of thick novel that you want to curl up with on a cold evening. The pages fly by quickly in this family saga and McInerney does a great job alternating between each character's story. The writing is excellent, with lots of wonderful descriptions along with insights into the Gillespie family.


Disclosure: My Kindle edition was courtesy of The Penguin Group via Netgalley for review purposes.