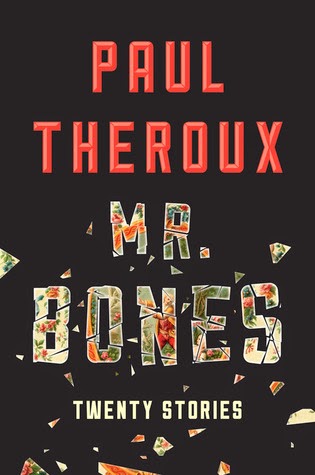 A family watches in horror as their patriarch transforms into the singing, wise-cracking lead of an old-timey minstrel show. A renowned art collector relishes publicly destroying his most valuable pieces. Two boys stand by helplessly as their father stages an all-consuming war on the raccoons living in the woods around their house. A young artist devotes himself to a wealthy, malicious gossip, knowing that it’s just a matter of time before she turns on him.
In this new collection of short stories, acclaimed author Paul Theroux explores the tenuous leadership of the elite and the surprising revenge of the overlooked. He shows us humanity possessed, consumed by its own desire and compulsion, always with his carefully honed eye for detail and the subtle idiosyncrasies that bring his characters to life. Searing, dark, and sure to unsettle, Mr. Bones is a stunning new display of Paul Theroux’s “fluent, faintly sinister powers of vision and imagination” (John Updike, The New Yorker).

Mr. Bones by Paul Theroux is a very highly recommended, wonderfully descriptive collection of twenty short stories. There should be a story that will appeal to almost everyone in these masterfully well written stories, many of which take common-place occurrences and put a twist on them.

Minor Watt: A wealthy man destroys his priceless treasure simply because he can.
Mr. Bones: A mild mannered father has a drastic and startling personality change.
Our Raccoon Year: A plague of raccoons changes a family's already fluid dynamics.
Mrs. Everest: A painter meets a gallery owner who courts his company even though she doesn't like his work.
Another Necklace: An author has a secret.
Incident in the Oriente: An overseas contractor wields his influence over those he employs.   Rip It Up:  Anxious, pimply fourteen-year-olds devise a plan to extract retribution on their bullies.
Siamese Nights: A man is assigned to work in Bangkok where he keeps a pictorial diary of drawings and meets someone special.
Nowadays the Dead Don’t Die: A man in the bush is asked to take a man with no family to the hospital. When the ill man dies on the way, he is unceremoniously buried - but then things begin to go wrong.
Autostop Summer: A writer visits Italy and recalls a trip there many years ago.
Voices of Love: This is a collection of short vignettes, first-person flash fiction, of unfaithful people.
The Furies: A man marries a much younger woman and his past begins to catch up with him.
Rangers: Scam artists hook-up and hit the road.
Action: A young man runs an errand for his father, who is very protective of him.
Long Story Short:  Another collection of short first-person flash fiction stories that feature young men coming-of age.
Neighbor Islands: A Hawaiian police officer catches his wife in a compromising position and then the incident is looked at from several viewpoints.
The Traveler’s Wife: A travel writer's wife starts expressing her opinions.
The First World: A wealthy man retires to Nantucket where he wishes to build his dream house.
Heartache: An elderly writer dies in the deep South.
I’m the Meat, You’re the Knife: A man who is back in his home town for his father's funeral visits his old English teacher who is dying.

Disclosure: My Kindle edition was courtesy of Houghton Mifflin Harcourt via Netgalley for review purposes.