The Sweetness of Life

The Sweetness of Life by Paulus Hochgatterer 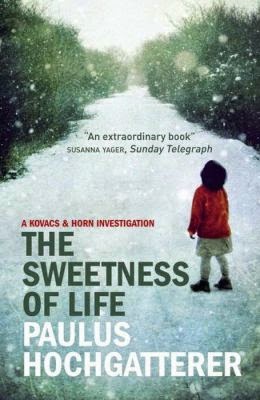 A German bestseller, winner of the European Union Prize for Literature, and longlisted for the German Book Prize in 2006, Paulus Hochgatterer has created a chilling psychological thriller a group of damaged people living in a pleasant and seemingly tranquil Austrian village. It's the Christmas holiday, the presents have been opened, and a six-year-old girl is drinking cocoa and playing with her grandfather. The doorbell rings, and the old man gets up. The next time the girl sees her grandfather, he is lying by the barn, his skull broken; his face a red pulp against the white snow. From that time on, she does not speak a single word.

Along with Detective Superintendent Ludwig Kovacs, Raffael Horn, the psychiatrist engaged to treat the silent child, reluctantly becomes involved in solving the murder. Their parallel researches sweep through the town: a young mother who believes her new-born child is the devil; a Benedictine monk who uses his iPod to drown the voices in his head; a high-spending teenager who tortures cats. With his background as a child psychiatrist, Hochgatterer draws back the veil of normality and presents a disconcerting portrait of a winter-held town filled with unsavory inhabitants.

The Sweetness of Life by Paulus Hochgatterer is a highly recommended, atmospheric and almost melancholy psychological thriller.

“Who could do a thing like that?” and why it sounded so jolly when she said it.
“Someone who has a problem with the sweetness of life,” he said, astonishing himself with his own words, because it was unlike him to tolerate such fanciful turns of phrase.

Translated from the German by Jamie Bulloch, this is author Hochgatterer's U.S. debut.  Set in the Austrian town of Furth am See, The Sweetness of Life opens with a grandfather, Sebastian Wilfert, playing Ludo with his granddaughter, Katharina during the Christmas season. A knock at the door sends her grandfather outside and Katharina later discovers his headless corpse outside, in the snow. Katharina goes mute, tightly holding onto two Ludo pieces. The crime is investigated by Detective Ludwig Kovacs,while child psychiatrist Raffael Horn sees Katharina in hopes of getting her to talk.

Both are Kovacs and Horn are morose, introspective, middle aged men who tend toward self -contemplation and disillusionment, which lends the whole novel a melancholy, mournful feeling. While we follow both men we see who the suspects in a town that seems to be full of damaged people. The actual setting and time of year amps up the bleak, atmospheric tension.

The strength of Hochgatterer's novel is found in the elegant descriptions juxtaposed to the sometimes depressing and brutal insight into the human condition, which makes perfect sense since Hochgatterer is a Vienna child psychiatrist. There is no nail biting suspense here, but rather a tale with an overwhelmingly feeling of depression, akin to seasonal affective disorder, mixed with the fragile hold on sanity experienced by several people.

The pace is slow and thoughtful, but the mystery is solved in the end, while you hope even more for some relief for both Kovacs and Horn as they plod through their very challenging jobs where despair and gloom seem to be close companions.


Disclosure: My Kindle edition was courtesy of MacLehose Press for review purposes.
Posted by Lori L at 5:00 AM