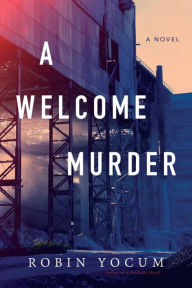 There is no question in many people's mind that Rayce Daubner deserved to be shot and left for dead in an isolated park. The question is who is responsible for the murder? Steubenville, Ohio is the setting for a widely diverse cast of characters and several suspects for Rayce's murder.

Johnny Earl, a former professional baseball player was just released from prison. He was busted for selling cocaine when Rayce worked as an informant with the FBI and set him up for the drug sting. Smoochie (Matthew) Xenakis's wife, Dena Marie Conchek Androski Xenakis, was having an affair with Rayce (and many others). Sheriff Francis Roberson, former FBI agent, dreams of running for congress and eventually the presidency. He needs to solve this case to look good and keep Dena out of his office. Allison Roberson, the sheriff's wife just wants her husband's plan to succeed so she can get out of Steubenville.

The novel is really pretty funny and clever as it quickly moves from one character's thoughts to the next. We aren't following the murder investigation; rather we are just following the thought processes of the different characters during this time. There is a bit of a surprise reveal and a satisfying conclusion. This is a well-written, entertaining mystery that is easy to follow, and a pure pleasure to read.


Disclosure: My review copy was courtesy of Prometheus Books.