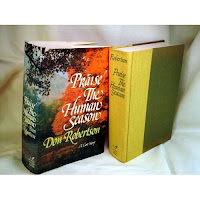 Praise the Human Season by Don Robertson was originally published in 1974 by Arthur Fields Books. My hardcover copy has 495 pages. Praise the Human Season is no longer in print and because of this the world is missing a truly great novel. Hopefully interested readers will be able to find a copy in their libraries (assuming that the library copies have been checked out enough that they have kept them). Robertson is the author of The Greatest Thing Since Sliced Bread. The good news is that some of Robertson's books are being reprinted or due out this summer. I will be able to continue the adventures of Morris Bird III in The Sum and Total of Now, due out Aug. 4, 2009, and The Greatest Thing That Almost Happened, due out Sept. 1, 2009.

Praise the Human Season is a love story of a life time between Howard and Anne Amberson. Knowing that they are both nearing the end of their lives, Howard Amberson decides they need to take a road trip with no destination in mind. At the same time Howard is secretly writing down his memories and recording past incidents in their lives. Not only is this a touching, heart breaking novel, it is also very humorous. The story of their adventure is interspersed with Howard's written memories from the past.
Very Highly Recommended- one of the best

Synopsis from the cover:

If ever there was a human book, this is it. A shining tribute to the human spirit, this is the delightful story of Howard and Anne Amberson, who in their seventies decide to take off, footloose and fancy-free on an aimless auto trip to find "the meaning of the apparatus."

Off they go on a rollicking, heart tugging, inevitably overwhelming voyage of self discovery. By day the Ambersons drive through the fall Ohio countryside. At night, when Anne is asleep, Howard, a retired English teacher and track coach, secretly scribbles in a ledger, re-creating in his precise hand past lives, past loves, a vast panorama of departed family and friends, After all, the Ambersons have lived a total of 146 years and the names on tombstones reel endlessly through their travels. But far from being lugubrious, Don Robertson's novel is an exultant celebration of the joys of life, the quirkiness of married love. It is a very funny novel.

As Howard peers nearsightedly over the wheel, he and Anne reminisce about their long life together and bravely discuss their fear of death, until Howard concludes that next to their love for each other, what does the apparatus matter?Don Robertson has written an transcendent love story of two people in the autumn of their lives, a hymn of praise to the human season.

"In the spring of 1971, when it became apparent to Howard W. Amberson that neither he nor his wife had much time remaining, he walked to Woolworth's and purchased a large ledger, bound in red and gray. He also purchased a dozen of those throwaway Japanese felt pens. He returned home, seated himself at the kitchen table and began to write....Amberson worked on the ledger in secret, usually late at night after his wife had fallen asleep." opening sentences

"The ledger... or journal... became obsessive with Amberson. It gave him enormous pain, but he kept at it. By the autumn of 1971, he had written several hundred pages, and his obsession led to another obsession that was even less reasonable. He decided it was imperative that he take his wife on a motor trip. He was seventyfour, and his wife (her name was Anne) was seventytwo, and she carried a large scar where her right breast should have been." pg. 4

"Amberson managed a sort of smile. 'I have been working at the idea for some months now,' he said. 'There is an apparatus we do not understand, and Anne and I have the right to investigate it. We are not stupid, and perhaps we shall discover something.'
'Howard, you are talking absolute crap.'
'I am talking nothing of the sort. I have given it all a great deal of thought.'
'You'll take her away from her home when she is dying, when you are dying?' " pg. 6

" A movie camera will enable me to photograph changing leaves," said Amberson. "And relics in museums. And sunsets. And Indians weaving rugs. And then I'll splice all the film together and give illustrated lectures in church basements. I'll call them 'Footloose with the Ambersons.' " pg. 7

"There was rancor in our family (there is rancor in all families, even the happy ones, and never mind what Tolstoy says), but most of the time it was successfully suppressed. We believed that existence was hard enough, which meant we believed that it was foolish to bring troublous things into the open." pg. 10

"We weren't lazy, were we? We worked hard. We had energy. Why then does it come down now to all this silence? How can a person live most of his life one way, with the energy and all, and then end it another way, with all the pooping around, with all the groaning and all the complaining and all the scars and all the pain? Where's the mercy in it? How come it isn't neat? Sometimes I can taste the silence. It is like dust. I kiss the old pictures, and then I close my eyes, and then I see the boys, and I...well, I...just..." pg. 41

"See it this way, Amberson: Acknowledge yourself to be an honest man but at the same time moderate and thoughtful and not afraid of sentiment, not afraid to embrace it here near the end of your life as your days leak away." pg. 69

" 'I won't ever see this place again, will I?'
They were standing in the front hall, and Amberson had been about to open the door. He turned and said: 'That's not so. We're just going on a little trip.
'I knew that was what you would say.' " pg. 74

I have been looking for this book since I read it in 1980.I could not remember the title. A story of a brief pilgrimage at the end of their brief pilgrimage .It is a beautiful book;and the misreading of the less-loved son is so heartbreaking because the parents are good people.