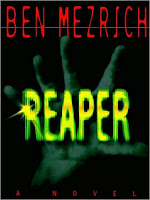 Reaper by Ben Mezrich was originally published in 1998. My hardcover copy has 342 pages. The premise, that a biological virus is about to be spread through TVs or computers has been tackled before - and with better results. Although there were a few exciting moments, all in all the characters were under developed and the plot implausible and full of holes. If this premise had been tackled by a better writer and the plot and characters fully developed and details researched, it would have been much better.
A so-so book - don't bother.
Synopsis from the cover:

In Boston, nine lawyers on a conference call suddenly convulse with pain, turn chalk white, and die. In Vermont, a young woman watching her favorite sitcom meets the same grisly fate, as does a group of sewer workers in Washington, D.C. Whatever has killed these people is spreading fast, and the task of eradicating it falls to young virologist Samantha Craig and paramedic Nick Barnes, whose brilliant surgical career was ruined by a crippling hand injury.

When Nick and Samantha discover that the virus, named Reaper, is spread through TVs and PCs, they realize that the information superhighway will become a killing field, with tens of millions dead, unless they can root Reaper out. Their search employs a dazzling array of real-life wizardry, from Mylar body paint to Stealth helicopters to CIA-bred swarms of insects. At the core of Reaper's madness, they find a suavely megalomaniacal, up-from-the-slums, high-tech billionaire; an icily ingenious hacker; and a high-powered cabal that will do anything to save the world from technology, even if that means annihilating the world.

"Mitch shifted his eyes back toward the television screen. The blue light started flickering; and moment Client 297 would appear. The anticipation was intense, and Mitch noticed that his heart was really racing. He took a deep breath, trying to calm himself - and felt a sudden, tearing pain under his rib cage." pg. 3

"Pulse jockeys. That was what they called themselves: the hard-core paramedics, the EMTs, the emergency specialists who lived for the adrenaline, the vein-popping surge they got when the pavement was flashing by and the sirens were screaming in their ears." pg. 14

"He moved his gaze from chair to chair, corpse to corpse. They were all the same. Ivory-white skin. Bulging eyes. Contorted spines. Jaw-clenched grimaces." pg. 24

"As you know, if we are talking about a virus, there could be a dormant form, mutations - with viruses, anything could happen. But there is no evidence that this is viral. It could have been some sort of chemical contamination, or perhaps bacteriological." pg. 32