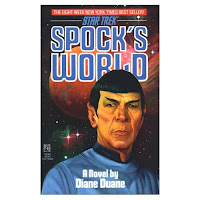 It is the twenty-third century. On the planet Vulcan, a crisis of unprecedented proportion has caused the convocation of the planet's ruling council -- and summoned the U.S.S. Enterprise™ from halfway across the galaxy, to bring Vulcan's most famous son home in its hour of need.
As Commander Spock, his father Sarek, and Captain James T. Kirk struggle to preserve Vulcan's future, the planet's innermost secrets are laid before us, from its beginnings millions of years ago to its savage prehistory, from merciless tribal warfare to medieval court intrigue, from the exploration of space to the development of o'thia -- the ruling ethic of logic. And Spock -- torn between his duty to Starfleet and the unbreakable ties that bind him to Vulcan -- must find a way to reconcile both his own inner conflict and the external dilemma his planet faces...lest the Federation itself be ripped asunder.

First, I totally understand and accept the fact that Trekkies will not care one iota what I thought about Spock's World. Any rabid Star Trek fan who is also reading Star Trek books is far more into the Star Trek canon than I could ever be. Spock's World has chapters concerning Vulcan history interspersed with those following the current action on the Enterprise. Even though the purpose of Spock's World is basically to explain the history of the planet Vulcan, make no mistake about it, Captain James T. Kirk, or Jim, is the star of Spock's World. You will find all of the series regulars here, along with their dialogue written to mimic their accents. There are a couple of funk-a-delic aliens to expand your imagination.

This book just made me smile. Not because it was funny (although parts were), it was just the whole idea of me reading a Star Trek book. The characters and some of their trademark phrases are clearly recognizable to anyone who has ever seen Star Trek. I can't fault Duane for her writing. She tackled the Star Trek world with an easy-to-read style that will likely appeal and be accessible to a wide age range. Even though one review on Amazon claimed, "Duane continually effeminates Spock's World." I didn't really notice that, but then I am effeminate myself. Do I recommend Spock's World? Well... as a general audience SF book, no; there's not that much action and you really need to know Star Trek to follow it. Would I recommend it to fans? Yes. You will like it. Will I read more in the Star T

rek canon? No, please let this be it, Just Me. I am now anxiously awaiting the Star Wars book. 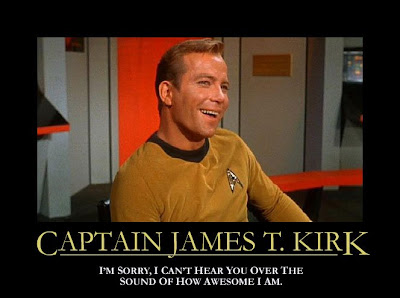 The joke in Starfleet is that the only thing that can travel faster than warp 10 is news. opening

His looks somewhat matched his dress: a man dark-haired, dark-eyed, deep-eyed, a hawk-faced man with no expression... at least none that most people here were competent to read. There was an energy in the way he held himself, some of those people would have said... perhaps too much energy, bound in check by a frightening control. They never knew how tight a control; they never knew how it slipped sometimes, and left their thought open to him. pg. 2

He had certainly needed one [a vacation]. That business with the Romulans, and right after it the interminable famine runs for gamma Muscae V, and after that, the intervention at 1210 Circini, with the Enterprise caught in the middle and everybody on the four planets in the neighborhood shooting at her: it was enough to turn your hair gray. pg. 13

I would suggest to you, Captain, that all liberties are about to be cancelled. I thought you might appreciate an advanced warning."
"Noted. What's going on?"
"A vote was taken this morning, and Vulcan has decided to call the Referendum. My presence will be required there and I would strongly suspect that the Enterprise will be sent there as well, to... reinforce the planet's memory of favors done in the past by the Federation."
..."We have no orders yet?"
"No sir. But I judge the probability of the imminent arrival of such orders to be ninety-third percentile or higher." pg. 19

"Go maire tu i bhfad agus rath!"
He hadn't turned the translator on that morning. Jim looked at Ronan, bemused. Ronan raised eyebrows at him and said, "Old Irish wayfarer's blessing. It translates as 'Live long and prosper.' " pg. 20

The source-of-gossip, also present at the party, had let Jim know later that the name signed at the bottom of the 'gram had counted for almost as much as Jorg's jump in grade to quartermaster's mate. Jim had been gratified -- there were apparently times when being a galactic hero could be turned to some use. "You're very welcome." pg. 27

"Ye can't put a drive together as if it was a bitty babbie's picture puzzle, for pity's sake," Scotty was telling the air with genial scorn, as junior crewmen scuttled around him with calibrating instruments and tools and engine parts, looking panic-stricken. "There's got to be some system to't. You can't bring up the multistate equivocators until the magnetic bottle's on-line, and where's the bottle then? Ye've had ten whole minutes! -- Afternoon, Captain," he added.

Jim smiled again. "Problems, Scotty?" he said, not because he perceived any, but because he knew Scotty expected that he would ask. pg 29

"Secession," Spock said, "is not the most accurate term for the act which the Vulcan planetary government is being asked to consider; but for the moment, it will serve. 44

This was my first and only Star Trek book. Although I watched the series often enough that I knew the characters and back story, I never thought I'd be reading a book in the Star Trek canon. It was surprisingly (to me) well written.