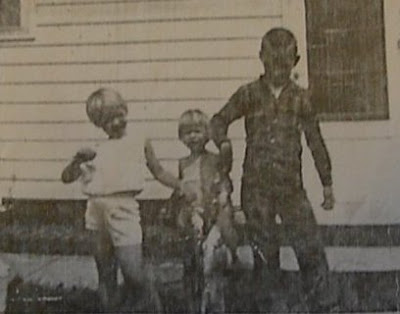 Lori, Hipee, and ED, with fish
(Notice my gameshow model stance; Hipee is half hidden behind the fish)
My childhood seemed to be filled with a lot of camping vacations. Camping was usually in a tent. Occasionally it was in a cabin, of sorts. Vacations were never luxurious. I imagine all of our vacations were much more work than fun for my mom. She probably always needed a vacation from the vacation. And, although we got away from home, we never really did all the fun touristy things other people seemed to do on their vacations.
Often we were taking vacations to fish. I never go fishing as an adult. I never even think about it. We also seemed to eat a lot of fried fish when I was a child. I’m not even sure how much I like fish anymore, to be honest. Oh, I like certain fish, like salmon and fresh tuna, but almost any other fish is on the menu because it was on sale and the rest of my family enjoys fish. I always bake our fish. I never fry fish. I just can’t take fried fish any more.
We went to a lake by the Black Hills of South Dakota several times when I was young. Now if you are picturing a lake surrounded by woods or actually in the picturesque Black Hills, think again. This lake was located in the sand hills near the Nebraska and South Dakota border. Picture an open prairie with low, rolling hills, a few scrub cedar trees (very few), lots of brown, dry grasses – that was where the lake was located. There were also some cottonwood trees by the water and some dead tree trunks submerged in the water. It was not a cool, picturesque lake retreat. It was hot, dry, sandy, and dirty.
I remember bits and pieces of our trips there. I know my dad and brother went fishing every day. I know we stayed in a cabin, but it was really more like a shack. I remember a marina bar/restaurant where we’d go to occasionally get a soda during the day. I seem to recall that they allowed my Dad to use a freezer, or had freezer space for all his cleaned fish. The goal was for him to get his daily limit of fish while on vacation. It seems like it was more of a hunting/gathering expedition than a vacation, but that was the way it went at my house.
One day my dad caught a big snapping turtle – and I mean big. The shell must have been eighteen inches across. As we were all looking at it, carefully staying away from the jaws, a man came up and offered my dad what was a large sum of money in those days to buy it. Dad sold it. I guess the guy was going to eat it. We didn’t eat turtle. We just liked to look at them. Did I mention that we did eat lots of fish, always fried?
While there were also many other little camping vacations, the other one I remember was when we were camping by a canal. It was, of course, another fishing expedition. I remember this particular spot not so much because it was a more lush and verdant area. I remember it because of the total freak-out. See, there was a little stream my sister Hipee and I were playing in near the tent. The stream had a small, cement spillway for easy crossing. The stream itself was shallow, so it wasn’t a problem to cross, or play in. The problem was after we were done playing in the stream. We discovered we had leeches on us. (Cue in high-pitched girlish screams here.) Yes, leeches. You know in the movie Stand by Me, when the boys get leeches on them? Yeah. Leeches like that only not down our pants, just on our legs. Even so, that was bad enough.

We also had to do a tick-check every day. I don’t know about you, but somewhere where you have to do a tick-check on everyone at least a couple times a day, if not more often, no longer sounds like a very appealing vacation spot to me. Maybe one tick check after one day in the outdoors, but the thought of a vacation composed of mandatory tick checks several times a day just sort of sets my teeth on edge now. At the time it seemed normal.
Dad, ED, Hipee, me, and an Uncle.
Hipee is behind the fish, half hidden, again. Notice her open shirt and both hands holding up her shorts. I'm the one, hands on hips and stomach out.
Since ED and I were looking off to the right, something must have been going down over there

I’m not too interested in camping any more. Although I’m not opposed to doing dirty jobs and like to be outside, gardening if possible, I also like to bathe regularly and have indoor plumbing with privacy. I prefer a bed over a sleeping bag in a tent. I like my pillows. I like air conditioning and refrigerators. Even when my family had a small camper it just wasn’t the same as my own bed. In fact, that old camper was more uncomfortable than a tent, as far as sleeping went, because it stayed so darn hot, even at night. Perhaps I’d be comfortable in one of those nice, new, big campers that are more like a home on wheels, but that wasn’t an option when I was young and I’m just not interested now.

Of course, we all know how I feel about ticks and leeches. Today I’m still not too thrilled when I have to pick ticks off the dogs - or me. And I would imagine people would be less accepting of a fifty year old woman screaming over a leech and doing the get-it-off-me dance.

(The photo's are from photocopies of water damaged prints. Why, yes, they are pictures of us posing with dead things.)

Oh! I loved reading this!
We always camped too, but in a little skamper pop up camper... a family of 6.
But, it's good memories.

Oh, the turtle! Some people love them! We used to fish in a pond that had turtles. They were gross big things, looked like they were 100 years old. Ick. I remember somebody telling me that turtle meat is really tender & makes delicious soup. I just took their word for it.
I love your pictures. :)

Thanks Jane!
I always looked in wonder and awe at one neighborhood family who took a yearly vacation to Disney World. It was like we were living by a family of millionaires - at least in my mind, LOL!