The first thing we did for Movie Dude weekend was watch two DVD's of pictures that were shown at my brother-in-law's funeral. They were both wonderful tributes and we will cherish the pictures for years to come.

"Disaster movie maven Roland Emmerich's apocalyptic sci-fi thriller following the prophecy stated by the ancient Mayan calendar, which says that the world will come to an end on December 21, 2012. When a global cataclysm thrusts the world into chaos, divorced writer and father Jackson Curtis (John Cusack) joins the race to ensure that humankind is not completely wiped out."

Movie Dude and Just me were pretty chatty all through the movie... until Movie Dude fell alseep. Don't ask me how he could fall asleep. It is an intense movie. Just Me threw a coaster at him to wake him up. I'm kind of looking forward to watching 2012 again, with Wonder Boy. He won't talk during the movie.
All the K 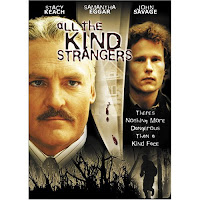 "Samantha Eggar and Stacy Keach play motorists held prisoner by a family of seven sweet-faced young orphans and their savage guard dogs. The children only want a mother and father but are willing to kill anyone who rejects them. Jon Savage co-stars with Robby Benson, who sang the theme song. All the Kind Strangers was initially telecast November 12, 1974. "

I remember watching this on TV when it first came out. It didn't seem quite as creepy now as it did then. Of course, I might have been distracted because there was a lot going on during the movie.

Just Me and Movie Dude had pulled out Just Me's netbook and were checking out online videos. This is one of their new past times for movie night - that and flipping through all the TV music stations. If it's not toddler tunes, it's chilled out vibes. They both found their favorite song for the evening - Rockin' the Beer Gut.

the 2012 movie made a cool explosion e-card, its worth checking out :) http://bit.ly/cKHVQU