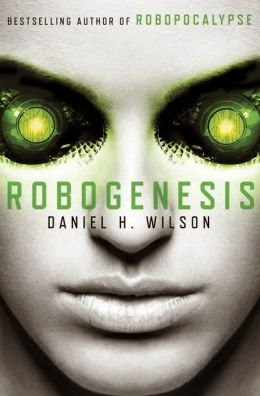 "The machine is still out there. Still alive."


Humankind had triumphed over the machines. At the end of Robopocalypse, the modern world was largely devastated, humankind was pressed to the point of annihilation, and the earth was left in tatters . . . but the master artificial intelligence presence known as Archos had been killed.


In Robogenesis, we see that Archos has survived. Spread across the far reaches of the world, the machine code has fragmented into millions of pieces, hiding and regrouping. In a series of riveting narratives, Robogenesis explores the fates of characters new and old, robotic and human, as they fight to build a new world in the wake of a devastating war. Readers will bear witness as survivors find one another, form into groups, and react to a drastically different (and deadly) technological landscape. All the while, the remnants of Archos's shattered intelligence are seeping deeper into new breeds of machines, mounting a war that will not allow for humans to win again.


Daniel H. Wilson makes a triumphant return to the apocalyptic world he created, for an action-filled, raucous, very smart thrill ride about humanity and technology pushed to the tipping point.

Robogenesis by Daniel H. Wilson is a highly recommended sequel to Robopocalypse - and there are robot/human zombies, which may be a plus for some readers.

"In its last days, the thinking machine known as Archos R-14 was trying to know humanity. It mastered the art of capturing a human mind. When it died, it left behind the tools. I found stories trapped in patterns of neurons. Using scavenged hardware, I took three accounts straight from three minds and I lined them up from beginning to end and back again. Three times to tell it. Three times to understand. They say history is written by the victors, but this right here is told by its victims. My name is Arayt Shah, and this is the story of how I won the True War."

In Robogenesis we learn that artificial intelligence Archos-14 has survived the war. What was unknown after the war was that Archos had many copies of his code hidden in caches around the world. Now that code is awakening, but there is also an earlier version of Archos which calls itself Arayt Shah. Arayt Shah believes that the True War is between artificial intelligences. "I decimated the human race, regrettably. But I did so with one purpose: to forge a hybrid fighting force capable of surviving the True War—a war that has been initiated and is being fought by superintelligent machines. Instead of simply discarding your species, as the others would, I have transformed your kind into a powerful ally."

While you thought the Robot War was just between humans and robots, it is robots vs. new robots vs. freeborn robots. Add to the mix humans against the not-quite human modifieds and parasitic dead (think robot/human zombies) as well as the robots. The idea of sentient machines fighting humans, with or without the machine/human zombies, is a grim enough prospect.

Robogenesis is organized into three parts, based on three characters that were also in Robopocalypse: Lark Iron Cloud, Mathilda Perez, and Cormac Wallace. There are also other characters from the first book that come back for this sequel along with some new characters. Although Wilson provides some back story, if you haven't read the first book you may want to before this one.

I felt like Robogenesis was actually a stronger novel than the first because the stories and the plot seemed more focused and polished, however this could be from reading the two novels back to back. The pace is again fast and furious. There is still a Terminator feel to these novels for me (and World War Z for others). For science fiction fans this may be a good choice. Wilson has a PhD in Robotics so he knows his AI. I liked this one but have to admit I'm tired of the whole zombie craze.  A solid airplane book.

Disclosure: My Kindle edition was courtesy of Knopf Doubleday for review purposes.