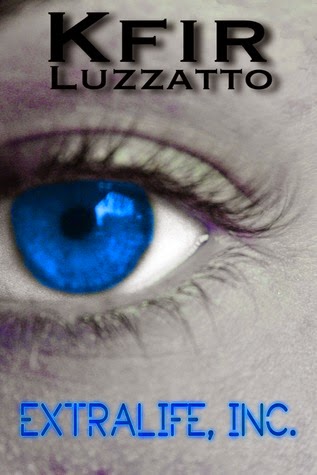 
David Wolfson, a Jerusalem scientist, claims to have found the cure for cancer. He and his wife, Tamara, seek the help of Richard Lunz, a Tel Aviv attorney, to fight the powerful bureaucrats who want to appropriate David's invention.
Richard can't resist the temptation to participate in what looks like the discovery of the century and it takes a first death to make him doubt that something in the project is not what it seems.
And then other people die.
Following clues that take him to Eastern Europe and to America, Richard finds more answers than he wished for. But he just can't stop looking.

ExtraLife, Inc. by Kfir Luzzatto is a recommended thriller.

In ExtraLife, Inc. Richard Lunz, a Tel Aviv patent attorney, is approached by a doctor's wife and told that her husband has discovered the cure for cancer and needs to patent it. David Wolfson is a scatterbrained, unorganized doctor who claims that he needs to patent his cure for cancer before the hospital takes credit for his discovery away from him. Aided by his shrewish know-it-all wife, Tamera, Richard was contacted to help them make his patent a reality. While Richard should have been suspicious right from the start when Tamara, a woman who claims to be an attorney, wants him to sign a poorly written contract, still he forges ahead, trying to get David to provide him with his research notes and data, all of which seems starngley lacking or not readily available. Then, when someone dies, Richard begins to wonder what exactly the Wolfson's are planning to do.

Although this is presented as more of a science fiction novel, the sci fi aspects are not in the forefront of the plot. It is more a legal thriller.

My big problem with ExtraLife, Inc. is the awkward wording of sentences, conversations, transitions, phrases. It was obvious enough to me that I wondered if this was a translation from another language. After looking into it, I discovered that English is not in the author's native tongue, which makes sense.  It would have behooved Luzzatto to get some professional editing help. A little editing would have helped enormously; the poor writing quality detracts from all of the pluses for me. Setting it aside, the story is decent. There are some great twists and the intrigue is solid. He captures the legal system like the expert he is and does a great job inserting little clues for the reader to follow.  If you are able to ignore the quality of the writing, it is a decent novel.


Disclosure: My Kindle edition was courtesy of Pine Ten LLC via Netgalley for review purposes.