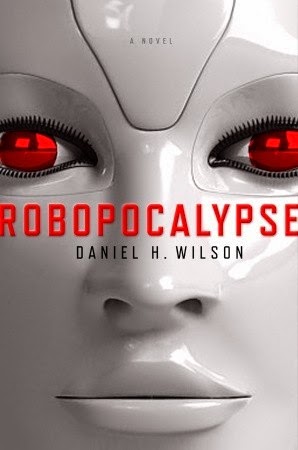 
In this terrifying tale of humanity’s desperate stand against a robot uprising, Daniel H. Wilson has written the most entertaining sci-fi thriller in years.

Not far into our future, the dazzling technology that runs our world turns against us. Controlled by a childlike—yet massively powerful—artificial intelligence known as Archos, the global network of machines on which our world has grown dependent suddenly becomes an implacable, deadly foe. At Zero Hour—the moment the robots attack—the human race is almost annihilated, but as its scattered remnants regroup, humanity for the first time unites in a determined effort to fight back. This is the oral history of that conflict, told by an international cast of survivors who experienced this long and bloody confrontation with the machines. Brilliantly conceived and amazingly detailed, Robopocalypse is an action-packed epic with chilling implications about the real technology that surrounds us.

Robopocalypse by Daniel H. Wilson is  recommended - highly if you are looking forward to the future movie by Steven Spielberg and to his latest book, Robogenesis.

In Robopocalypse Cormac Wallace, a survivor and soldier from the robot wars, shares the intel he has gathered on the history of the robot uprising in hopes of telling anyone who cares what happened. "I didn't ask for it and I don't want to do it, but I know in my heart that somebody ought to tell their stories. To tell the robot uprising from beginning to end. To explain how and why it started and how it went down. How the robots came at us and how we evolved to fight."(pg. 4)

What follows is a series of short chapter presented in vignettes, like collected news stories, about how the uprising first began. Wallace shares his own thoughts before and after each section. We learn that an evil computer program, Archos, is sentient and has escaped from his controlled environment. Archos runs rampant and is able to control machines around the world. His goal is to either murder or enslave all humans. Predictably, humans resist. What a computer can't recognize is human ingenuity and the will to survive. And there might even be a secret weapon Archos couldn't predict.

Since the story is all told in short chapters that tell brief exciting parts of the uprising, the action never lags and the pace is quick. Using the stories to tell what happened gives the novel the feel of a documentary. This format makes character development simply a by-product of the accounts and not a major concern.

I had two issues with Robopocalypse. First, while I admittedly enjoyed it, it did feel like another sequel to The Terminator. My other issue was that the individual accounts didn't quite have a unique voice to give them distinction. A solid 3.5 (which rounds up) entertaining airplane book. It'll keep you occupied.
Posted by Lori L at 5:00 AM