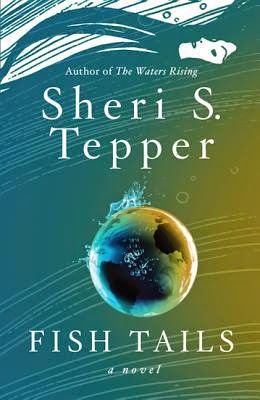 In Fish Tails, two of Tepper's beloved characters—Abasio the Dyer and his royal wife, Xulai (A Plague of Angels and The Waters Rising)—are traveling through the scattered villages of the sparsely populated land of Tingawa. Accompanied by their young children, they seek to warn everyone of the dire ecological changes that will alter their lives and those of their children for generations to come.

The waters are rising, and will eventually inundate their world, transforming it utterly and irrevocably. Many of those born in the coming century will resemble their son and daughter—sea children who can live without land. Abasio and Xulai also hope to find others interested in adopting their sea-dwelling lifestyle.
Along their journey they encounter strange visitors from the far-off world of Lom, characters from Tepper's nine-book True Game series of novels—Mavin Manyshaped, Jinian Star-Eye, and Silkhands the healer—all of whom have been compelled by an interfering, time-traveling, rule-breaking do-gooder to perform one last virtuous act on Earth before its metamorphosis is complete.

Fish Tails by Sheri S. Tepper is a highly recommended fantasy novel with a message - alongside notable world building and character development.

Fish Tails, the official third book in The Plague of Angels series, continues several storylines and brings back numerous characters found in many of Tepper's previous novels. Specifically this time the main focus is on Abasio and Xulai and their aquatic enabled children (think merbabies). The earth will be flooded soon and become a water planet.  Abasio and Xulai's twins, a boy and girl, Bailai and Gailai, have gills, fins, and a tail for legs. They can breathe air and water - in otherwords they are the hope for the future of the human race after the aquatic apocalypse. There is a way for others to have their future children resemble the twins, thus ensuring the continuation of their bloodlines.

The problem is that Abasio and Xulai need to be careful and cautious when approaching others about the future water-world because there are sects that oppose any alteration of the body (and we are talking alterations as minor as pierced ears, let alone having children resemble merbabies.) Adding to their complications, they end up having two other children traveling with them. And then there is the griffen problem...

Most of this novel seems to be a road novel and consists of the main characters traveling and encountering problems as well as supportive people along the way. Tepper does a good job in her world building and descriptions of various despicable and misogynistic groups they encounter. There are talking animals, creatures that were made by surviving, misguided humans after the Big Kill, and a host of ignorant, unworthy bad guys. Her characters are well developed and stay true to their nature as the plot progresses and their knowledge advances.

I have enjoyed several other Tepper novels in the past, but am unfamiliar with the storylines continuing from A Plague of Angels and The Waters Rising. This may actually be to my benefit because much of the information and backstory presented in Fish Tails was new to me. Other reviewers have found way too much repetition in this novel. I enjoyed the world building and the character development.

Admittedly, Fish Tails did go on and on and on a bit too long for me. Note that at 720 pages it requires a commitment - I was good with most of it through the first half but began to grow a bit weary toward the end and wanted things to pick up, the writing to tighten up, and the action to advance forward.  I should also mention that some readers may find Tepper's underlying message in the novel objectionable.