The Killer Next Door

The Killer Next Door by Alex Marwood 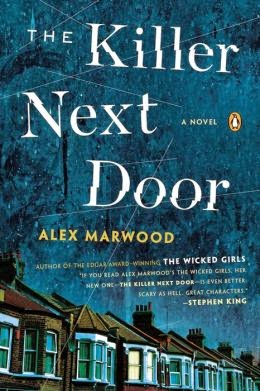 . . . a brilliant, tightly paced thriller that will keep you up at night and make you ask yourself: just how well do you know your neighbors?
Everyone who lives at 23 Beulah Grove has a secret. If they didn’t, they wouldn’t be renting rooms in a dodgy old building for cash—no credit check, no lease. It’s the kind of place you end up when you you’ve run out of other options. The six residents mostly keep to themselves, but one unbearably hot summer night, a terrible accident pushes them into an uneasy alliance. What they don’t know is that one of them is a killer. He’s already chosen his next victim, and he’ll do anything to protect his secret.

The Killer Next Door by Alex Marwood is a highly recommended macabre, psychological thriller that is not for the faint of heart.

All the six residents at No. 23 Beulah Grove in London are hiding or escaping from something. It is that kind of boardinghouse with the kind of landlord that people who are hiding prefer. Even as we learn about the secret lives of the residents, we know for certain that one of them is a killer who calls himself the Lover. The Lover is trying to perfect mummifying women.

Collette is the latest tenant. She's on the run and trying to hide, but needed to return to London to see her dying mum - not that she was much of a mother, but she's all Collette has. Residents already occupying rooms include: Vesta, a 70 year old woman who has lived in the basement apartment her whole life; Hossein, a man who's seeking political asylum in England; Cher, a street-wise, underage runaway from a social services children's home; Thomas the tedious boarding house bore; and Gerard, a recently divorced man who plays classical music 24/7. Roy Preece is the morbidly obese landlord who knows he is taking advantage of most of his tenants. He allows those who prefer it to pay cash and he, in turn, does nothing to improve the property.

We slowly learn more about each tenant, and view their lives from their perspective, including some very gory details about the consummately creepy one only known as the Lover. While this is a tense, taunt thriller, with several surprising revelations and more than one suspect, it also contains some concern and bounding between characters, which is surprising in people who stay alive by being suspicious of everyone, as well as dark humor.

This is certainly a page turner with a plot that moves along at a nice quick pace. The characters are all well developed and you will care about what happens to some of them while hoping others get what they really deserve. The Lover's identity was no great surprise for me, but the path to the reveal was definitely entertaining.

Thanks to Penguin's First to Read Program for providing my digital review copy.