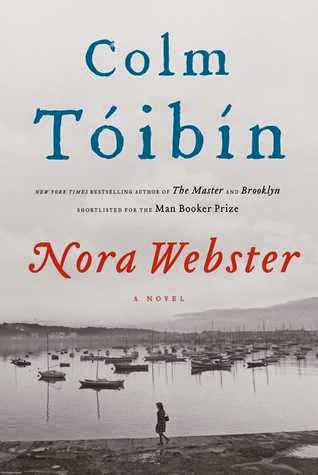 From one of contemporary literature’s bestselling, critically acclaimed and beloved authors, a magnificent new novel set in Ireland, about a fiercely compelling young widow and mother of four, navigating grief and fear, struggling for hope.
Set in Wexford, Ireland, Colm ’s superb seventh novel introduces the formidable, memorable and deeply moving Nora Webster. Widowed at forty, with four children and not enough money, Nora has lost the love of her life, Maurice, the man who rescued her from the stifling world to which she was born. And now she fears she may be drawn back into it. Wounded, strong-willed, clinging to secrecy in a tiny community where everyone knows your business, Nora is drowning in her own sorrow and blind to the suffering of her young sons, who have lost their father. Yet she has moments of stunning empathy and kindness, and when she begins to sing again, after decades, she finds solace, engagement, a haven—herself.

Nora Webster by Colm Tóibín is a highly recommended character study of a widow in Ireland.

Nora Webster's beloved husband, Maurice, has died after an extended illness before the novel Nora Webster by Colm Tóibín opens. Nora, 40, must deal with her grief, and she deems the best way to do this is to hide it and put on a stoic face to the world and for her four children. She has been left without enough money to support her family and must find employment again after years of being a homemaker.  While Nora is sure her two almost adult daughters, Fiona and Aine, are going to be alright, she is less sure of her two young sons, Donal and Conor. After an extended stay with her Aunt while Nora attended to a dying Maurice, Donal now has a stammer and it seems both boys are suffering and have nightmares.

But Nora is suffering too, although she is trying to hide it and, really, would like to hide, although the small village she lives in makes that impossible. Nora needs to mourn but feels she can't.
"She wondered if she would ever again be able to have a normal conversation and what topics she might be able to discuss with ease and interest. At the moment the only topic she could discuss was herself. And everyone, she felt, had heard enough about her. They believed it was time that she stop brooding and think of other things. But there were no other things. There was only what had happened. It was as though she lived underwater and had given up on the struggle to swim towards air. It would be too much. Being released into the world of others seemed impossible; it was something she did not even want. How could she explain this to anyone who sought to know how she was or asked if she was getting over what happened?"

This is an exquisite character study of a woman trying to do the best she can while facing what appears to be an insurmountable task: normalcy in a world that has been upended and dashed to pieces. She needs someone who can give her good, common sense advice on how to proceed from Maurice's death into her dramatically changed new role, but there is no one to ease the way, no one who can talk sensibly about raising her children, earning money, and how to live now. Nora needs to find a way back into the world sans her husband, and a way to help her family.

Tóibín does a remarkable job depicting Nora as a real flesh and blood person. We are privy to her inner thoughts. She can be prickly and obstinate, but she is also determined and intelligent. When she rediscovers her love of music it helps lead her on a path to self-acceptance and self-discovery. This is a novel that deals with mourning, but also healing.

Disclosure: My Kindle edition was courtesy of Scribner for review purposes.
Posted by Lori L at 5:00 AM