What You Left Behind 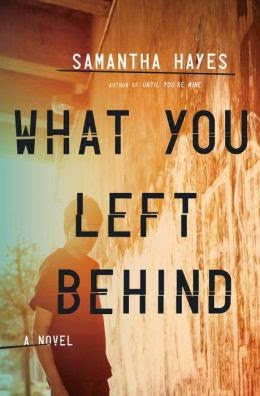 Two years after a terrifying spate of teenage suicides, the remote village of Radcote has just begun to heal. Then a young man is killed in a freak motorcycle accident and a suicide note is found among his belongings. When a second boy is found dead shortly thereafter, the nightmare of repeat suicides once again threatens the community.
Desperate for a vacation, Detective Inspector Lorraine Fisher has just come to Radcote for a stay with her sister, Jo, but the atmosphere of the country house is unusually tense. Freddie, Jo's son, seems troubled and uncommunicative, and Jo is struggling to reach out to him. Meanwhile, Lorraine becomes determined to discover the truth behind these deaths. Are they suicides, or is there something more sinister at work? Finding answers might help Freddie, but they'll also lead to a shocking truth: whatever it is—or whoever it is—that's killing these young people is far more disturbing than she ever could have imagined, and unraveling the secret is just as dangerous as the secret itself.

What You Left Behind by Samantha Hayes is a recommended psychological thriller featuring British Detective Inspector Lorraine Fisher, who was first introduced in Hayes 2014 Until You’re Mine. What You Left Behind opens with an unnamed young woman walking away from a horrific motorcycle accident that left her boyfriend dead. "I don't look back. I don't want the memories that will haunt me, torment me in my dreams, soak my bed with night sweats. As far as I'm concerned, I was never a part of this." This is only the first of many secrets held by the various characters in this novel.

When Lorraine and her daughter Stella spend a week visiting her sister, Jo Curzon, and Jo’s 18-year-old son, Freddie, in the village of Radcote, the vacation isn't quite as relaxing as Lorraine had planned. Jo has recently separated from her husband, Malcolm, and Freddie is moody and sullen. To add to the gloomy mood, there has recently been another teen suicide. Radcote previously experienced six teen suicides in two weeks two years ago. Jo is worried about Freddie, who seems depressed, is heard crying in his room, and may be self-harming himself. Unknown to Jo, Freddie is being cyber bullied and is constantly receiving texts telling him to kill himself.

After meeting Sonia Hawkeswell, a volunteer at the local homeless shelter whose own son committed suicide, and her daughter Lana, who is a friend of Freddie's, Lorraine decides it is time to begin an investigation into the suicides. Much to her chagrin the chief investigator is an old nemesis and she knows he is incompetent enough to overlook important clues and evidence in his investigations. Adding to the assortment of odd characters is Gil, Lana's autistic uncle who is an accomplished artist, and Frank, a creepy man who works at the homeless shelter.

The quality of the writing is excellent and Hayes had me hooked at the beginning with the timely plot featuring cyber bullying and the teen suicide cluster,  but then the narrative began to wander a bit for me as it turned into more of a police procedural. I wasn't completely thrilled with the character Gil being made autistic and then thrown out there as an odd person who could be suspicious with bad intentions. There are twists and turns in this novel which seem to be all thrown in at the last minute. I also felt like there were a few story lines that could have brought to a conclusion more completely.


Disclosure: My Kindle edition was courtesy of Crown for review purposes.