How to Tell Toledo from the Night Sky 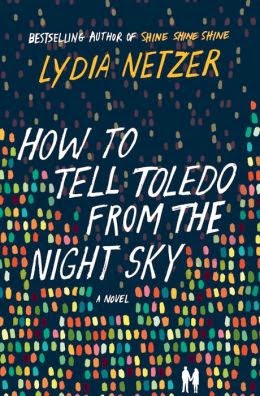 Lydia Netzer, the award-winning author of Shine Shine Shine, weaves a mind-bending, heart-shattering love story that asks, “Can true love exist if it’s been planned from birth?”
Like a jewel shimmering in a Midwest skyline, the Toledo Institute of Astronomy is the nation's premier center of astronomical discovery and a beacon of scientific learning for astronomers far and wide. Here, dreamy cosmologist George Dermont mines the stars to prove the existence of God. Here, Irene Sparks, an unsentimental scientist, creates black holes in captivity.
George and Irene are on a collision course with love, destiny and fate. They have everything in common: both are ambitious, both passionate about science, both lonely and yearning for connection. The air seems to hum when they’re together. But George and Irene’s attraction was not written in the stars. In fact their mothers, friends since childhood, raised them separately to become each other's soulmates.
When that long-secret plan triggers unintended consequences, the two astronomers must discover the truth about their destinies, and unravel the mystery of what Toledo holds for them—together or, perhaps, apart.
Lydia Netzer combines a gift for character and big-hearted storytelling, with a sure hand for science and a vision of a city transformed by its unique celestial position, exploring the conflicts of fate and determinism, and asking how much of life is under our control and what is pre-ordained in the heavens.

How to Tell Toledo from the Night Sky by Lydia Netzer is a very highly recommended buddy-novel-cum-romance-cum-dysfunctional-family story about cosmology, astronomy, and astrology. Yes, it is all that and more.

In Pittsburg astrophysicist Irene Sparks has made a research discovery that will define her career. At the same time her research project shows results, her estranged mother Bernice, an alcoholic who worked as a psychic, has a fatal fall at her home in Toledo.  Sparks' ground breaking discovery has allowed her to accept her dream position at the Toledo Institute of Astronomy, while concurrently dealing with her mother's demise. She is leaving her boyfriend, Belion, behind, but he soon calls and says he is coming to Toledo too.

Already at the Toledo Institute of Astronomy is George Dermont, an astrophysicist who just happens to be trying to prove that a gateway to the gods exists. Unknown to all but his father, George actually sees some of these gods in his daily life and has for years. George has always felt that he is missing someone, someone who was there but then left. He's also on the prowl for any female astronomer with brown hair who also happens to be a dreamer. A Psychic once told him that would describe the woman with whom he would fall in love. When he sees Irene for the first time he knows she is the one, the one he has been missing for years.

Unknown to either Irene or George is the fact that their mothers used to be very good friends and had planned from their conception that their children would be soul mates - that they were destined for each other. But currently neither George nor Irene has a clue that their mothers ever knew each other, let alone had a plan for their future - together.

This is a wonderfully quirky, mind-bending, eccentric story. I'll fully admit that I thought I had the plot all figured out very early on, and as one prediction after another came to be true, I was feeling a little smug, and a little let-down, that is until Netzer threw in some zingers and surprised me. This is not a run-of-the-mill love story. It is an original blend of science, mythology, fate, predetermination, psychics, gaming, family history, dream-control, and romance.  It is totally original and unique.

Netzer's writing ability has to be a major part of the success that she can pull off such an unusual story and have it work so well. The characters were wonderfully realized, totally formed individuals that are certainly unique. The plot is a creative blend of what an astute reader might guess is going to happen along with some real surprises that I'll venture no one would predict.

I love Netzer's Shine, Shine, Shine and was a bit worried that How to Tell Toledo from the Night Sky wouldn't live up to her first novel. It was a crazy concern with no basis in fact. This is an excellent novel that stands on its own and need no comparison to her first novel. In fact, I had an audio copy of Shine, Shine, Shine  and loved it, but after reading Netzer I'm planning to go back and read it so I can savor her written words. She has a brilliant way of expressing herself and I think I need to see her written words.

Now, while I adored this novel I can see where some people might have a problem with its mix of psychics, and sex, and science, so keep that in mind.


Disclosure: My Kindle edition was courtesy of St. Martin's Press via Netgalley for review purposes.
Posted by Lori L at 5:00 AM